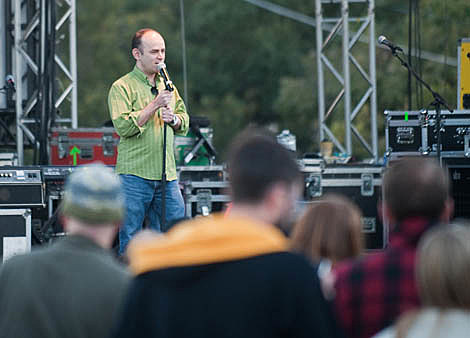 Want to laugh Tuesday night? Head over to Lolita Bar at Broome and Allen for another edition of "Tell Your Friends!". This week's special guests include HANNIBAL BURESS (who performs a free show every Sunday at Knitting Factory) (and who recently opened for Aziz Ansari at Beacon Theater), LIAM McENEANEY, ANDY DE LA TOUR, and a "MYSTERY GUEST" who "is doing a big big show later in the week, and can't be advertised for this. He appears all over television and films, though, and this may be your last chance to see him in a basement before he's too famous for our show. - A MUST SEE!" Hmm.

Speaking of a big big show later in the week, Nick Kroll's two tapings at Music Hall of Williamsburg take place this Thursday, 11/18.

Nick also did a show at UCB tonight/Monday right before Whiplash (with special guest Mike Birbiglia). How was that? Whiplash takes place every Monday.

MGMT's Andrew VanWyngarden will be a guest at the live broadcast of WFMU's comedy/variety show "Seven Second Delay" at UCB Theatre on Wednesday (11/17). $5.00 tickets are still on sale, though note that he won't be performing. They'll be interviewing him, but they promise they have a couple of surprises planned. Other guests appearing on the same show: former New York Times Ombudsman Dan Okrent, and author / gambling expert / former bookie Beth Raymer.

That WFMU thing is early - like 6pm. Stick around after for an edition of Joe Mande and Noah Garfinkel's Totally J/K with special guests Hari Kondabalu (Comedy Central Presents), Greg Johnson (Sirius/XM Radio) "& more!" Then stay even longer, cause Joe Mande is also part of the show right after that too. Anthony Atamanuik, John Flynn & Ed Gavagan also perform in "The Nights of Our Lives"

Much like Pee Wee Herman, Colin Quinn has a new show on Broadway (which is directed by Jerry Seinfeld) (the Colin show) (Jerry didn't direct the Pee Wee show). We are giving away tickets to see Pee Wee. The Apiary has a pair up for grabs to see Colin.

What about Eugene Mirman you ask? Well, in addition to stuff we've mentioned in the past and his somewhat regularly scheduled Sunday night shows at Union Hall, you can catch him along with John Roderick (as Santa Claus), A.C. Newman, John Hodgman, Gary Shteyngart, and Ollabelle on December 17th at City Winery for the next edition of John Wesley Harding's Cabinet of Wonders. Tickets are on sale.

You will also find Eugene Mirman at the Bell House on December 12th for "Pretty Good Friends (formerly Tearing the Veil of Maya) End of the Year Holiday Blowout" with Kristen Schaal, Jon Glaser and "more to be announced." Tickets are on sale.

Speaking of Kristen Schaal, was she at Littlefield last night/tonight/Monday night for "Hot Tub with Kurt"? It's unclear from the listings whether Kurt Braunohler is doing "Hot Tub" without her every Monday night through 11/29. Upcoming listed guests include Wyatt Cenac, Laura Krafft, Dan Friel, Jon Friedman, Liam McEneaney, and Chris Rozzi.

Last but not least, after postponing the original date, honorary Juggalo Gallagher will appear at Gramercy Theatre on April 8th. Tickets are on sale.