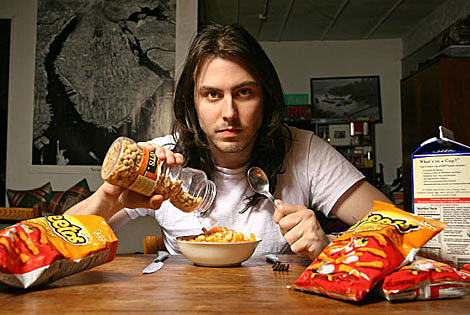 Hello! I hope you're well. I recently released an album called 55 CADILLAC. The Guardian asked me to write about it here. They requested I explain why I made the album and why it contains only improvised piano pieces. That's somewhat of a tall order for me at the moment (I just had a gag order put on me - really!), but I will do my best to type some words and hope they cover some of the desired bases.

Why and how I made this album is somewhat difficult for me to write about. Allow me to state the following: Over the past 10 years, I've had personal and professional issues with several people involved in my career, and due to formal agreements, I'm partially forbidden from going into detail regarding certain aspects of my recent work and, as a result, the making of the 55 CADILLAC album.

Here's what I am able to say: At the end of 2004, an old friend of mind got in some business trouble and basically decided to take it out on me. To cut a long story short, this person is someone I worked very closely with and had a formal and family business relationship with. Due to various complaints this person had with me, they were able to turn my life and career upside down. I wasn't allowed to use my own name within certain areas of the US entertainment industry and we were in a debate about who owned the rights to my image, and who should get credit for "inventing" it. This made my life complicated and intense for a few years, but I kept working and doing whatever I could to keep moving forward.

By 2008, and after a lot of negotiating, my new business team and I had come to an agreement with my opponent, and I was finally in the clear. That's how this new 55 CADILLAC album became possible - we based the new record label in the UK, so there were no issues within the US. However, as of last week, we've been partially pulled back into the thick of it and I'm getting hourly updates from my lawyer as I type this. I really don't know how to feel about it ñ it's beyond frustrating - it almost feels like a hallucination. It inspires so much rage inside me that my mind has to seek other outlets for that energy and I start to feel dizzy and see stars. Fortunately, I don't have to deal with anyone directly. Thank goodness my lawyers do all the real work.

Anyway, I wanted this new 55 CADILLAC album to sound like freedom. The sound of a piano being played by a free man - nothing more, nothing less. This was the first chance in almost 10 years where I was allowed to simply play and record an instrument - no songwriters, no lyrics to learn, no overdubs, no slow fixes, no remixes, no video shoots or interview practice ñ just the sound of someone sitting in room playing piano for the sake of it. No one telling me what to play, or how to play it. And no masterplans, high-concept visions, worldwide goals with roll-out schedules. No style consultants or acting coaches. No more meetings with sponsors or computerized yelling. No more threats.

Andrew W.K. will be one of the unexpected guests at Gonzales' show at Joe's Pub tonight (9/25). Gonzales plays two sets, but the piano battle with Andrew W.K. will be at the midnight show only. Jamie Lidell will be there as well.

Andrew W.K. goes on tour with the Calder Quartet starting September 29th - they play Joe's Pub together on October 2nd.

After that, Calder Quartet plays music of Janácek and Fred Frith with Iva Bittová at (Le) Poisson Rouge on November 17th. Tickets are on sale.

Andrew W.K. is playing with Fucked Up in Brooklyn on November 5th.

See Gonzales challenging Andrew W.K. to a piano battle in the video below...