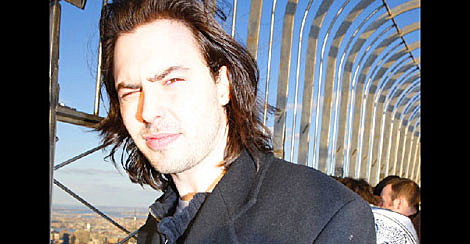 As part of a resurgence of activity, ANDREW W.K. will play a very special concert on MARCH 16th, 2010, at the FILLMORE NEW YORK at IRVING PLAZA, Manhattan, NYC. The performance will be Andrew's first headlining public concert in New York in over 5 years and comes at a time of building excitement and buzz, growing steadily ever since Andrew W.K. was first unofficially "removed" from regular live touring in 2005.

Also on the NYC bill for that show will be The Dirty Pearls and Chainsaw Trio. Tickets go on presale February 24th at 10am. General sale tickets TBA.

The show's announcement comes the same day as Andrew WK's "Ask Andrew W.K. Anything" event, happening at Santos Party House tonight (2/23). The show is sold out, but you will be able to stream it (@ 8pm EST) and ask questions online through a Justin.TV player that is also embedded below .

Andrew WK and band will be at SXSW this year, and we're beyond excited to announce that in addition to the super exciting announcement that Roky Erickson/Okkervil River is playing, Andrew will play a solo set at the just-announced BrooklynVegan/M for Montreal day party at Galaxy Room (formerly Radio Room) on Saturday, March 20th. Full lineup TBA soon.

He'll also be playing other SXSW shows (like an official showcase Wednesday night at Buffalo Billiards), some with the full band, and he'll be playing bass with Thurston Moore's reformed Society's Ills at the Ecstatic Peace showcase on Friday March 19th (though note: there is a rumor that Society's Ills are no longer playing the Ecstatic Peace show, but instead just playing a day party... stay tuned).

Other upcoming live shows include MtyMx (in Mexico), Big Ears (with an orchestra) and will be on the road all summer as a headliner on the Warped Tour. Andrew fits in everywhere! All dates here.

Andrew WK's previously import-only album Close Calls With Brick Walls was set to come out today (2/23) but will instead get released March 23rd on the Steev Mike label (? - Andrew WK's alleged alter-ego, something that I'm sure will be addressed at Santos tonight). It comes with a 'rare & unreleased' bonus disc called Mother of Mankind. One of the songs on the record is the awesomely appropriate at any age anthem "Not Going to Bed". The video, which came out in Japan after the album's initial release in 2006, is posted below along with a message from Andrew and an "advertisement" for the new record...

Andrew W.K. - Not Going to Bed

"I have been waiting and waiting for the perfect time to play with band in New York again. For various reasons, the universe has aligned itself last minute and the gods have responded: We have license to rage! I am so excited that this 1st show back can happen in my home city! The perfect time was a feeling in the air- with the eve of Saint Patty's providing a sweet spirit of celebration, this will be the hardest party yet."