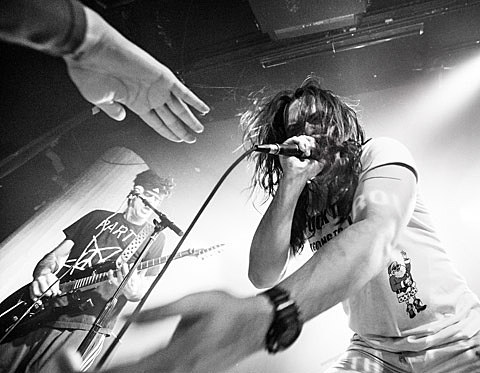 If you live in NYC and want to see Andrew W.K., the question isn't ever really "when will there be a show?" as much as it's "which one should I go to?" with pretty much new Andrew W.K. shows popping up by the minute. He just did a Super Bowl halftime show at Santos and has a slot at upcoming pop punk festival Skate and Surf.

But this upcoming 285 Kent show on March 6 that he just scheduled is looking like one of his cooler appearances in a while. That venue's been hosting some pretty great bills lately, and for this one, Andrew W.K. will be joined by DOM, CIties Aviv, Dickpic (aka the collaborative project of DJ Dog Dick and Pictureplane), and Cool Serbia. That should make for an all-around crazy night and tickets to be part of it are on sale now.

Andrew W.K. will also be at IFC Center on February 28 (323 Avenue of the Americas) for a screening of David Lynch's The Elephant Man. Not sure what he'll be doing, but he'll be there.