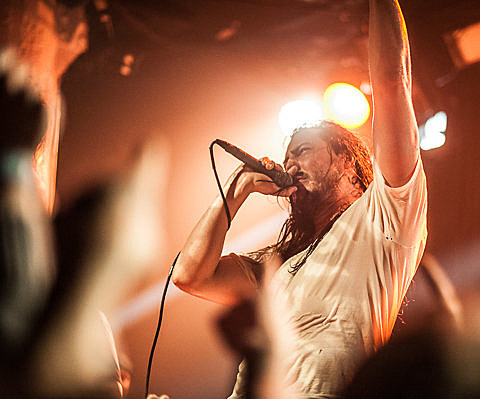 Black Sabbath, whose current lineup includes Ozzy Osbourne, Tony Iommi, Geezer Butler, and Rage Against the Machine drummer Brad Wilk, are going on a tour this year in support of their new album, 13, and they've just announced that professional partier Andrew WK (who just broke a world drum record) will be joining them on tour to open each night with a DJ set before Sabbath play. Regarding being asked to join the tour, Andrew said:

I'm just shocked. It's just the most incredible dream come true! This is the greatest honor I could be given. I remember when the phone rang and I first heard that Black Sabbath wanted me to be their exclusive opening act. I was really in a state of disbelief - almost sick with amazement and excitement. It took about 3 days until I fully mastered the reality of this opportunity and realized it was really going to happen. Black Sabbath's music changed my life from the first time I heard it, and this tour will change my life all over again. I couldn't be more thankful or humbled by this one-in-a-billion miracle. Can this really be real!? What kind of adventure will this be!?

The tour never actually hits NYC but it comes close on August 4 at PNC Bank Arts Center (Holmdel, NJ) and August 8 at Mohegan Sun Arena (Uncasville, CT). The NJ show appears sold out at the moment, but tickets are still available for the CT show.

All dates are listed, along with a video of Andrew WK performing with Ozzy's daughter Kelly Osbourne, below...