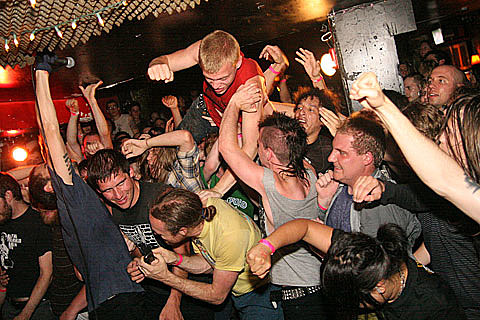 One of the biggest, most genuine music fans I know is Andy from Ludlow Street indie rock club Cake Shop. He's an indefatigable listener and always turns me onto new stuff. Here we've got his "best of 2012 and live from cakeshop and recorded" which is topped by Parquet Courts' fantastic debut album, Light Up Gold. You can check out the full list of "21 AMAZING EXPERIENCES" below.

Andy is also a great maker of mixes, and I stil put in one he made for the Cake Shop/Slumberland 2009 SXSW showcase from time to time. Over at the Cake Shop blog, he posted a 2012 mix loaded with great stuff that you can download above and see the tracklist below. Highly recommend. Cake Shop had a successful Pledge Music campaign this year, signed a new 10-year lease, survived the Great Sandy Blackout, and I can't wait to see more bands there in 2013 (like maybe Obits on January 19) and beyond.

Andy from Cake Shop's Best of 2012 list and mixtape tracklist are below... 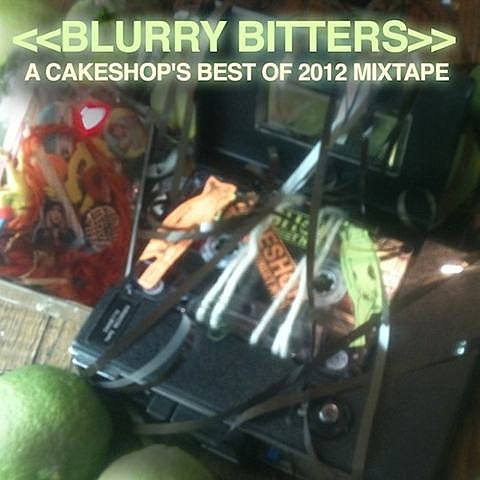 Here's my awesomely fine selection of bands and songs that stayed on my iPhone the LONGEST (isn't that that only way to tell we love something anymore?)? The mix is descending in a way...I love all of them, but my very favourites are at the end. XOXO to you all in the new year, these bands saved my life, as it was truly one of my least favourite years for anything else other than rad tunes from cool bands.

1. Almond Man - PRINCE RUPERT'S DROPS [Beyond is Beyond is Beyond] - Always loved this band, and so glad there's finally have vinyl proof of that love ,and that i'm not alone
2. On Our Own - DUNE RATS [self] - Surfy punky australian funboys. they totally mean it. see them live & late at night.
3. Showers Of Pain - PUNKS ON MARS [ZooMusic] Mozarty funpop, updated milk & cookies, unbelievable & this single. holy moly!
4. A Little Past Midnight -GAP DREAM [Suicide Squeeze] Hazy dreamy killers from cleveland. love them.
5. Puts Me To Work - CATE LE BON [Control Group] Cate will never write a bad song. To have that superpower must be incredible!
6. OUR LAST WORDS - GLASS ANCHORS [Capeshok] Annie and pals always golden, love this track so much from the EP
7. IS IT HONEST? - WOODS [Woodsist] - ...Probably my favourite single song of the year. Absolutely beautiful.
8. Miracle - RADAR EYES [Hozac] - Feelgood riff of the year award. The whole album is so great.
9. Cupid #2 - MAD SCENE [Siltbreeze] - Incredible perhaps last record by the legends xoxo and this some is so good.
10. Sit On It - DARLINGS [self] - Not sure if this came out in 2012, maybe next year. Amazing start to finish from one of NYs very best. Wish we could put it out.
11. Prime - MIKE WEXLER [Mexican Summer] - Wexler always just blows me away with anything he does.
12.Prettyboy - DAN DEACON [Domino] - A warm burst of sheer beauty from the mastermind.
13. Friends Of Friends - HOSPITALITY [Merge] - A new way to rewrite pop is all we ever want from life.
14. No Can Do - LADYHAWK [Triple Crown Audio] - Worth the wait 2012 record from these Canadian heavyhearted bros that I know will never cease to make me feel incredibly good.
15. Walking Down Your Street - NUDE BEACH [Other Music] - I listened to this record in June or July so much that i puked (it was from warm beer though)
16. Paul - TYLER JON TYLER [Rococo Records] - Oops - i just found out this song is two years old, but the live show from this year remains my favorite show at cakeshop this year. Such a great, great, great band.
17. Milo Minute - GRASS WIDOW [HLR] Our heroes. In love with anything they do.
18. Light Up Gold - PARQUET COURTS [Dull Tools] - Without question, Album of the year for sure. I feel like it wwas written just for me. Can't talk about this record without getting annoyed when other people say they love it too, like any true music snob. See them live.
19. Invade Your Dream - OUTSIDE WORLD [Night People] - Absolutely my favourite new band of this year. completely floored and in love, listened to them more than any other band this year. Sweet male female unison harmonies. wowowow. You get it, I love 'em.