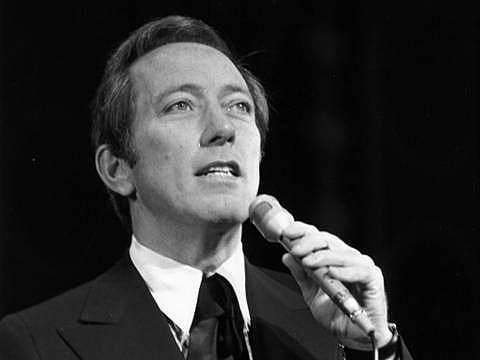 "Moon River" was written by Henry Mancini and Johnny Mercer, and Audrey Hepburn introduced it in the 1961 film "Breakfast at Tiffany's," but it was Mr. Williams who made the song indisputably his own when he sang it at the 1962 Academy Awards ceremony and titled a subsequent album after it. When he built a theater in Branson, he named it the Andy Williams Moon River Theater.

"Moon River" became the theme song for his musical-variety television series "The Andy Williams Show," which, along with his family-oriented Christmas TV specials, made him a household name.

"The Andy Williams Show" ran on NBC from 1962 to 1971 and won three Emmy Awards for outstanding variety series. But its run also coincided with the social and cultural upheavals of the 1960s, and with a lineup of well-scrubbed acts like the Osmond Brothers (whom Mr. Williams introduced to national television) and established performers like Judy Garland and Bobby Darin, the show, at least to many members of a younger, more rebellious generation, was hopelessly square -- the sort of entertainment their parents would watch. - [NY Times]

Legendary crooner Andy Williams, who made the world swoon with "Moon River," lost his battle with cancer last night. He was 84. In addition to that song, Williams' hits included "Can't Get Used to Losing You" (memorably covered by The Beat in 1980), and the theme songs to Born Free and Love Story. He also made a zillion Christmas albums and chances are your grandparents own at least one of them. You can stream many of his hits below via Spotify and watch some classic video clips as well. Rest in peace, Andy.

Andy Williams on 'The Muppet Show'

Andy Wiliams - "Strangers in the Night"

Andy Williams with Simon and Garfunkel