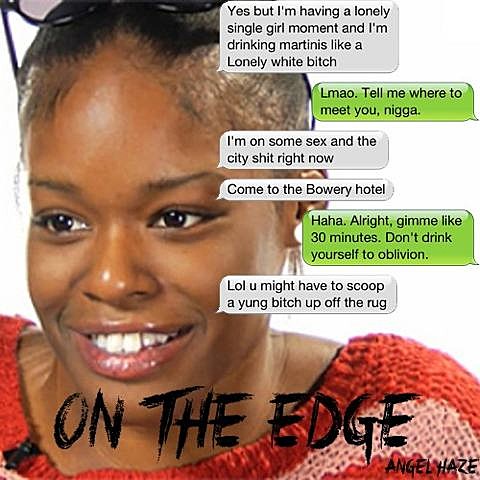 Things move quick on the internet, including fights. It was just this morning that Azealia Banks tweeted, "Seriously, if you were not born and raised in NY.... DON'T CLAIM NY. YOU ARE NOT A NEW YORKER." Angel Haze apparently took this to be a direct shot at her and her track "New York" and a Twitter fight ensued. (Some of the exchange was deleted, but Complex has the whole thing here.) Angel Haze posted a new track at 4PM on her SoundCloud called "On the Edge," a dis track absolutely pointed at Azelea, following up by saying she banged it out in, "20 minutes. It took me nothing but a hairflip...a real one." Zing! You can stream it below. A comeback track by Banks seems likely, no?

Meanwhile, Azealia Banks recently released a new track, "BBD," from her oft-delayed debut album Broke with Expensive Taste (currently due out February 12), and you can stream that below too.