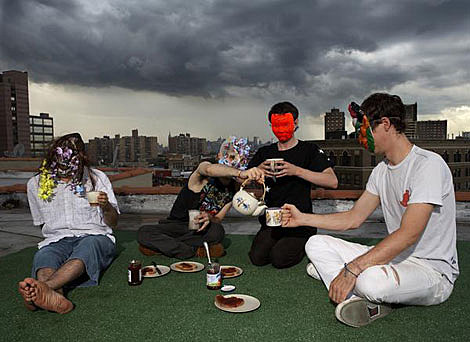 "We were really pulling for Panda Bear and crew. When I wrote last week that Animal Collective might make it onto the Billboard 200 charts this week based on the first-week sales of the vinyl edition of their Merriweather Post Pavilion album, the underdog quality of that potential feat was kind of exciting ... and subversive.

But, alas, despite selling out all 4,500 copies of the first run of Pavilion almost instantly across North America, with so many of those sales happening in indie shops that don't report to Nielsen SoundScan, the scrappy sonic experimentalists just didn't make the cut.

According to next week's Billboard albums chart, Pavilion officially moved 1,500 copies, which put them just outside the big game, even in this moribund time of year when the majority of the albums in the top 200 saw double-digit sales dips. Had they been able to scare up another 1,000 official sales, they might have sneaked in above the likes of former "American Idol" Kellie Pickler, Lifehouse, OneRepublic and Framing Hanley, all of whom sold in the 2,400 realm, which was enough to sneak them onto the bottom of the charts.

Better luck next week, when Pavilion is officially released on January 20, with a good chance to score an old-fashioned chart debut thanks to the flood of already rapturous reviews it's received as one of the best albums of the year so far." [MTV]

Today is January 20th. Obama is about to become president. Merriweather Post Pavilion is out. Hipster Runoff will now say a few words.

Animal Collective will play the Grand Ballroom in NYC tonight. They will also play the even smaller Bowery Ballroom tomorrow. Those in attendance should feel lucky because Animal Collective's next scheduled NYC show after that is now May 13th at Terminal 5. All tour dates below...