Don't forget that the free Animal Collective show at South Street Seaport in NYC is this Friday June 1st. Danielson is opening, and XXXchange (Alex Epton of Spank Rock) will be playing records from 6-7 pm.

BV's Mississippi correspondent Deepak Mantena was on hand at Animal Collective's recent show at the Bottletree in Birmingham. This is what he brought back.... 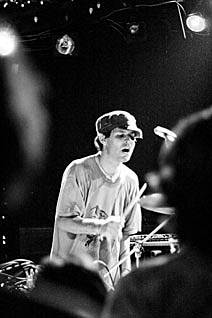 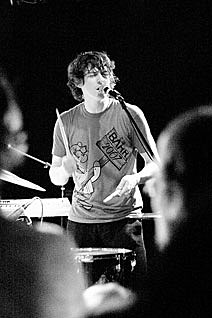 On May 28th I drove three hours to a (very) sold-out Animal Collective show in Alabama, with Sir Richard Bishop opening. I only caught the tail end of Sir Richard Bishop on stage, but it was clear to everyone he's a humble and very deft guitarist. The focal point of the evening was obviously Animal Collective's set. I had often heard their live show characterized as tribal and raw, but those were pretty meaningless adjectives to me as I'd never seen them play. What I witnessed was an absolutely frenetic but still very tight show. The whole group (Avey Tare, Panda Bear, and Geologist) was able play their songs in a way that seemed to encourage improvisation while never missing a change. The majority of their set consisted of new nameless songs (which have no studio versions yet), but they closed with a few old songs, notably "Loch Raven", "We Tigers", and "Leaf House." Was it worth the long drive and being jammed between people in every direction for 2 hours? Absolutely. If you haven't seen them play live, go now while they are still hitting their stride. 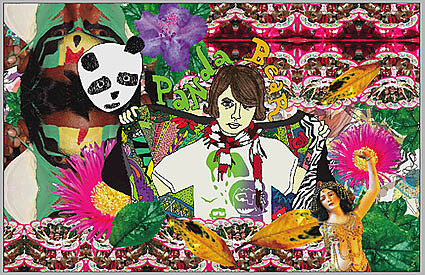 Initial work for Strawberry Jam started in September 2005 as Animal Collective prepared to tour Europe for the release of the band's 2005 album, Feels. The process immediately became a very intense and emotional one and they all agreed on a desire to preserve the rawness of the songs that was happening during the initial writing sessions. Animal Collective was very attached to these songs in a live setting and to preserve the live stage energy was a mission.

Though the melodies and lyrics for Strawberry Jam were written by Panda Bear and Avey Tare in various places such as Paris, New York, Lisbon and Baltimore, there was also three intense full-band writing sessions with Geologist and Deacon. These production sessions occurred in both Lisbon and in NYC. So, while the songs might seem to come from all over the map emotionally, it was important to match that geographical variation sonically.

Strawberry Jam was recorded in January of this year at The Wavelab in Tucson, Arizona with The Wizard Scott Colburn. The band drove 30 minutes each way, everyday, to and from their rented house. There was much Tecate drinking, barbecues, Javelina sightings and other desert oddities that might have influenced this record... like the day the desert was covered in glistening ice. The album was completed and mixed with the gracious help of Nicholas Vernhes at The Rare Book Room in Brooklyn, NY.

For the uninitiated, Animal Collective is a group of four best friends who grew up playing and recording music together in Baltimore County, Maryland. Why Animal? Cause it's the only word they could think of that made any remote connection to what they thought their sound was -- and of course, they love their fellow animals very much. Why Collective? The band has always wanted to be the ones who define who and what AC is. Two people? Four people? Why not? Don't be surprised if you come to see the band and its not what you thought it would be (and try not to get too upset).

Over the last few years Animal Collective has seen its fan base swell due to the amazing live shows and hard touring. They get bigger and stronger with each passing album, exploring new musical visions with creative force. The band eschews genres and labels and prefers to be inspired environmentally - an "anything can happen" sort of vibe, which they capture with amazing consistency.

AC continues onward after seven years and seven albums (six studio, one live) that combine a love of sonic freeform electronic-horror-gospel-hip-hop soul-pop-madness and brings it all together into something that is hopefully totally pleasing and at other moments completely scary and confusing. Most importantly they hope it's refreshing in this crazy, crazy world.

STRAWBERRY JAM will be released on Domino Recording Co. in September 2007 worldwide.

The artwork you see above is by Sir W Woods.

Gorilla vs. Bear has a report from the Dallas show. Panda Bear is also playing a bunch of shows. Here's two more pics from Alabama.... 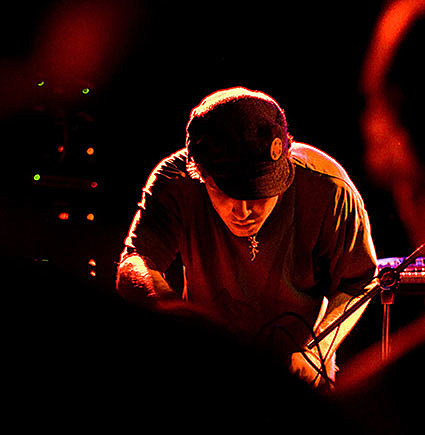 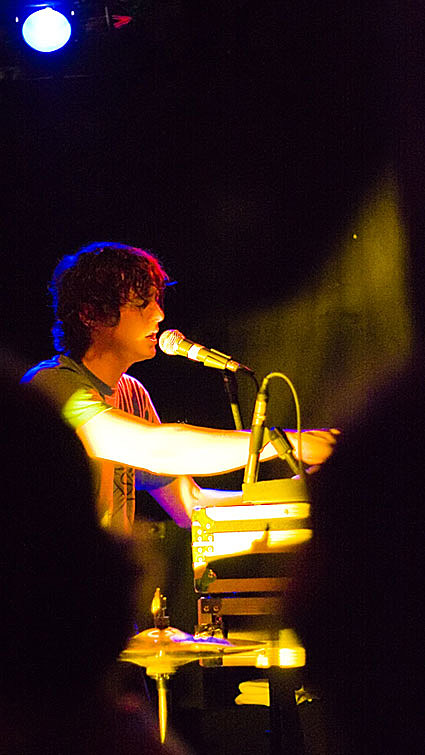