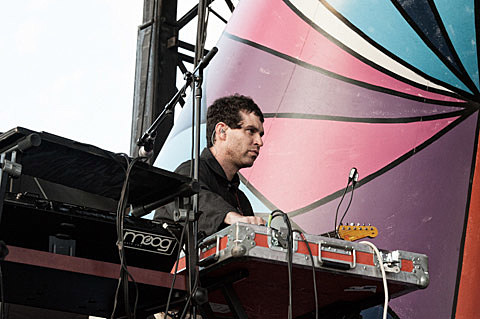 Animal Collective have been out on the road lately, hitting festivals like Bonnaroo and NYC's Governors Ball. They were supposed to return to the NYC-area this weekened (7/12) for Camp Bisco, but unfortunately the band have been forced to cancel all of their July dates. A statement from the band reads:

Due to illness, we will unfortunately not be able to perform our upcoming July tour dates, including the Camp Bisco and Forecastle festivals. We deeply apologize and tried our best to make it work with an alternate set, but ultimately we didn't feel like we were giving fans what they deserved from an Animal Collective show. We are working on rescheduling the non-festival dates as soon as possible. Again we send our sincerest apologies to fans anticipating these shows, especially considering the cancellations earlier this year.

No replacement for AnCo's Camp Bisco set has been announced yet, but stay tuned for updates. The fest began today and is totally sold out.

All Animal Collective dates, as they currently stand, are listed below...