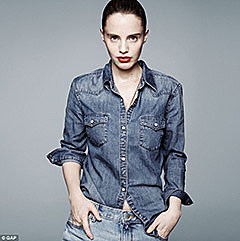 Anna Calvi, who released her second album, One Breath, last year, is one of many new faces you'll be seeing in GAP's new ad campaign, along with the likes of Theophilus London, Washed Out, actor RJ Mitte (aka Breaking Bad's Walt Jr.) and others. That's Anna's and Walt Jr's ads above.

Meanwhile, Calvi has recorded a live session for British music channel Transmitter and we've got the premiere of "Kiss My Twin" from that. Originally the b-side to single "Eliza," it's a real slow-burner that's a great showcase for both Calvi's impressive guitar skills and her glass-shattering pipes. Watch it below.

Anna Calvi -- A Kiss To Your Twin