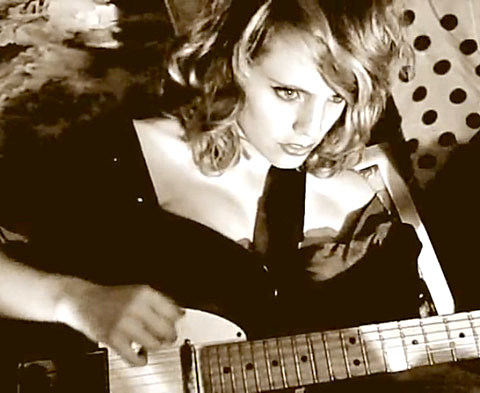 When the accolades come in from guys like Brian Eno and Nick Cave, It's hard not to take notice. Anna Calvi sings almost goth-y, reverb-drenched pop that recalls shoegaze and flamenco in equal measure. Her self-titled debut LP is due via Domino on March 1st, 2011

Co-produced by Rob Ellis and recorded in London and France, Anna Calvi's debut is an honest distillation of her talents as a songwriter, singer and guitar player. Haunted by the timeless sounds of Nina Simone and Maria Callas, as well as the classical romanticism of Ravel and Debussy, and the rock innovations of Jimi Hendrix and Captain Beefheart, [Calvi has adopted] an intimate backing band consisting of Mally Harpaz on guitar, harmonium and percussion, and Daniel Maiden-Wood on drums for her live shows.

Anna Calvi will play NYC in March. On March 9th she play Mercury Lounge (tickets), and then on March 10th it's at Glasslands (tickets). Those are her only scheduled US shows at the moment (that we know about).

Some mesmerizing videos of Anna Calvi are below. She breathes new life into songs by David Bowie, TV On The Radio, and Leonard Cohen. Dig on those along with all tour dates...