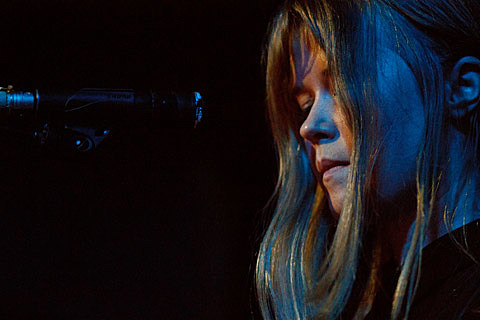 Swedish singer/church organist Anna Von Hausswolff is following 2012's Ceremony with a new album this year. Recorded on one of the largest pipe organs in Scandinavia (though not, presumably, the largest), it's called The Miraculous and it comes out November 13 via Other Music.

There are three songs that have surfaced from The Miraculous so far, and each has something different to offer. "Evocation" is a noisy, industrially-tinged dirge, and "An Oath" is a triumphant, organ-driven marching song. But the standout is the epic "Come Wander With Me/Deliverance," which covers an amazing amount of stylistic ground over the course of its 11 minutes. There's the ethereal, haunting organ music that opens, but there's also time for some doomy stomp, some post-rock stargazing, and a groovy, guitar-solo led climax. Von Hausswolff's voice also covers a lot of ground, going from lilting to piercing as the song demands. The most obvious point of comparison here is Chelsea Wolfe, and if you're a fan of hers you should give these tracks a spin. Listen below ("An Oath" is via Stereogum).

She has a European tour coming up, but first she'll come to the US for a record release show in NYC at Saint Vitus on November 12, and Tickets are on sale now. Openers have yet to be announced.