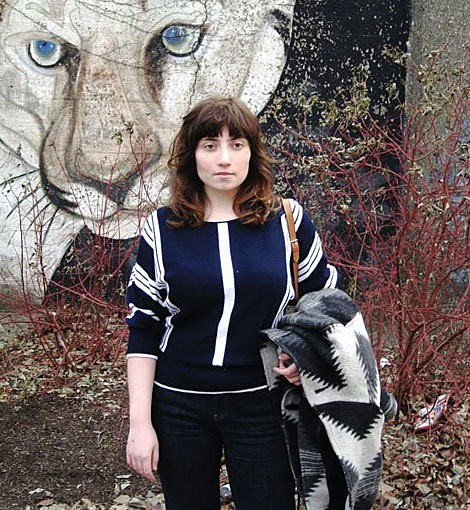 Brooklyn label Social Registry is presenting the show at 92YTribeca in Manhattan tonight (3/27). Sian Alice Group, Lights, Zs, and a group we recently featured, Mountains are on the bill. Updated Mountains tour dates below.

Speaking of NYC shows happening tonight and Mountains... the Mountain Goats, and John Vanderslice are here for their show at the Society of Ethical Culture.

Also related to today (3/27)... Having just played a few shows at SXSW, including the official showcase of her (and the Mountain Goats') label 4AD, Los Angeles/Chicago's Anni Rossi is currently on tour and plays a show at Union Pool in Brooklyn tonight with Midnight Masses and Wild Yaks. You may have also caught Anni when she opened for her label-mates Camera Obscura at Mercury Lounge the other night.

To say that Anni Rossi has given new life to the viola is an understatement. Together with her alternative folk style and lilting vocals, Rossi has reinvented the way this classical instrument is typically used and given new light to how Americana music is structured and presented.

Entrancing and beautiful, Rossi shared several songs with the Current from her upcoming CD, "Rockwell," out in March of 2009. [Minnesota Public Radio]

In April, Anni will go out on tour with Noah and the Whale. That puts her back in NYC, and at Bowery Ballroom, on May 1st. Tickets are still on sale. All dates and a video below.

Camera Obscura also played a show at The Bell House in Brooklyn the other night, and tickets are now on sale for the show they have coming up at Webster Hall.

Midnight Masses (playing Union Pool with Anni) just went on tour with, and share a member with, Trail of Dead (who we also caught at SXSW).