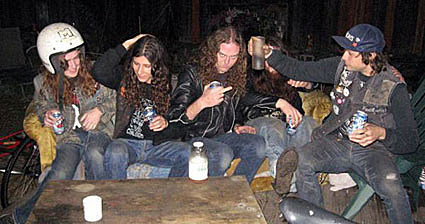 There are alot of bands who name drop the legendary Black Flag as an inspiration... Hell, I read once that even My Chem-meh-cal Romance consider Black Flag an influence on their sound. (Can't you tell?)

Then you have Annihilation Time, a monstrous five-piece unit out of Oakland who's brand of hardcore punk is a direct decendent of early Black Flag/ 80s hardcore but with a ratcheted up 70s rock spin. Greg Ginn's guitar work has always had an element of Thin Lizzy, 70s Aerosmith, and Black Sabbath in it, but Annihilation Time take that to the next level: think of Black Flag's "Jealous Again" with two Greg Ginns hammering out dual leads and you get the idea. (!!!)
Annihilation Time's new monument to raunchy beer-soaked punk, Annihilation Time III: Tales of The Ancient Age, hits the streets on May 20th via Tee Pee and as recently described to a friend of mine via IM, "it smooooookes". Seriously, III is NAILS. Check out the track "Splashback" above.

Also check out an interview the guys did with Thrasher Magazine.

Oh, it is absolutely mandatory that you check out their tour bus, which I am nominating as the world's most punk tour bus ever. Here's a pic of the outside. And the inside (both taken by Surgery at SXSW this year).

Video from two FULL shows, and their European (no U.S. at the moment yet...boo!) tour dates below....

The rest of the ENTIRE show can be viewed in parts two, three, four, and five

Annihilation Time LIVE @ The Charleston in Williamsburg July 2007, Part One

Check out more of the show in parts "two, three, four, five, and six.