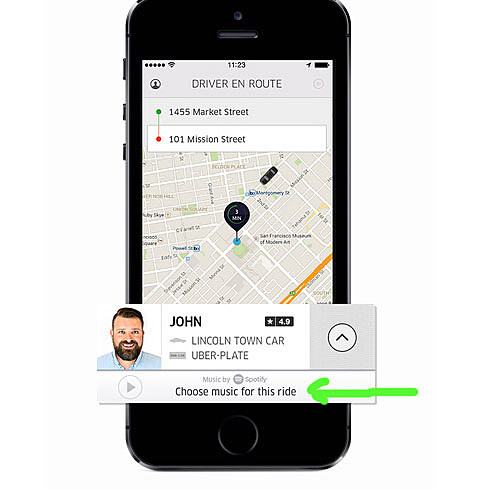 Uber and Spotify just announced a hip app partnership that starts going into effect in 10 major cities this Friday (11/21). As a demo video illusrates, Spotify premium users will be be able to choose the music they want to play in their Uber taxi ride in advance. "When your ride arrives, your tunes will be playing on the speakers. You can also change what's playing during your journey right through the Spotify and Uber mobile apps. It's all there - your own music and playlists and well as specially curated Uber playlists."

The ten "global launch cities" are London, Los Angeles, Mexico City, Nashville, New York, San Francisco, Singapore, Stockholm, Sydney and Toronto. To generate some buzz, "Spotify and Uber are giving fans a chance to connect with some of their favorite artists" in those cities. Exact details haven't been announced yet, but "participating artists include: Andrew W.K., The Sam Willows, Ximena Sariñana, Ansiktet, Professor Green, Diplo, Matt and Kim, Ricki Lee, Kevin Drew and Jake Owen. These special events for Uber and Spotify users - including artist ride-alongs and exclusive live sessions in five of the 10 cities - will take place on Friday, November 21. Stay tuned for additional details."

This actually could be cool, especially for those 2012-like moments when you really just need to hear "Call Me Maybe," but for the sake of your driver, please choose your playlists responsibly, and never, ever call an Uber.... while the streets have been shut down by police in riot gear...

(thx Mallory for showing me that video)