I needed an excuse to post two extra pictures from Antony's awkwardly short show at Hiro Ballroom in March.... 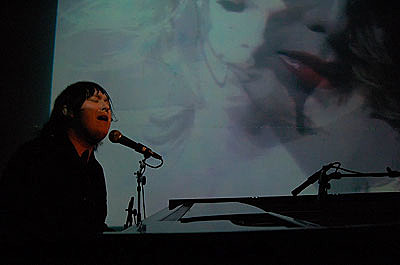 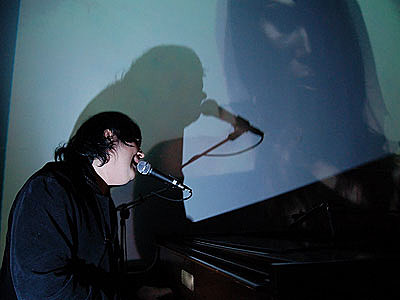 The latest press release from record label Secret Canadian was excuse enough. I've pasted it below....

In the wake of his I AM A BIRD NOW album, Antony has been working on a multitude of collaborations, film projects and live events. He co-produced and performed on the new album by Little Annie called SONGS FROM THE COAL MINE CANARY (Durtro/Jnana). He contributed the song "Hole In My Soul" on David Tibet's NOT ALONE 5-CD benefit for Doctors Without Borders (Durtro/Jnana), and has recorded duets with Bryan Ferry and Kembra Pfahler for a new Hal Wilner-produced collection of sea shanties to be released later this year. He's also contributed vocals to new albums by Matmos (Matador), Metallic Falcons (Voodoo Eros), My Robot Friend, and Joan As Policewoman (Reveal Records).

Antony is also prominently featured in the upcoming Leonard Cohen documentary I'M YOUR MAN, where he's presented performing the song "If It Be Your Will", and has songs featured in the feature-length films V FOR VENDETTA "Bird Girl", FREE JIMMY (a new song entitled "If You Love Me Then You Will Cut Me"), and LA VIDA SECRETA DE LAS PALABRAS by Pedro Almodovar protege Isabel Coixet ("Hope There's Someone").

On the live performance front, Antony just presented a concert in Leeds with composer Nico Muhly and the London Sinfonietta. He helped curate an evening in Poznan, Poland on June 30th, when Antony and the Johnsons will share the stage with Devendra Banhart, Animal Collective and Cocorosie. Antony and the Johnsons will also be performing in Athens, Greece on July 2, and on July 15th in the Latitude Festival in Suffolk, UK.