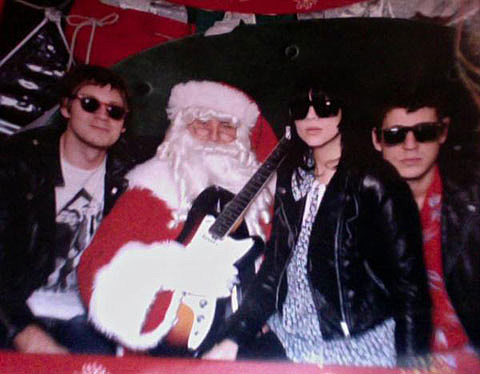 Crocodiles will be geting ready to release their new album, Sleep Forever, while on tour with Dum Dum Girls this summer along the West Coast. The LP will be out September 14th on Fat Possum. The above title-track will be released as a 7" before that, on August 17th with (double?) b-side "Groove Is in the Heart/California Girls." The album was produced by Simian Mobile Disco's James Ford (whose also worked on albums by Arctic Monkeys, Peaches and Klaxons). Live, the group has expanded into a five-piece, with drummer Alianna Kalaba, bassist Marco Gonzalez and keyboardist Robin Eisenberg.

After their tour with Crocodiles, Dum Dum Girls hit the road with Vampire Weekend and Beach House on an August/September tour that includes three nights at Radio City. Tickets are still on sale for those.

Dum Dum Girls now also have a headlining show of their own the night after the Radio City run set for Saturday, September 18th at Knitting Factory. Philly's garage duo Reading Rainbow open. Tickets are on sale.

Dum Dum Girls member Frankie Rose has a show coming with The Outs up as part of the Northside Festival on June 26th... which is odd because that is when Dum Dum Girls are in Washington... All tour dates below...