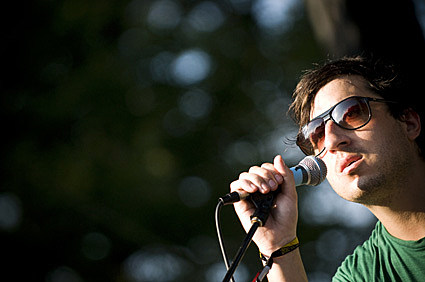 Currently on tour with Radiohead, Grizzly Bear's next NYC-area shows are this Friday at the All Points West Festival and the very next night at Music Hall of Williamsburg. I sent Grizzly Bear frontman Ed Droste a few quick questions to see how he was doing....

How is the Radiohead tour going? How was Lollapalooza? Any good stories?

Ed: It's been so amazing. It's definitely an entirely new experience for us, we aren't used to, and will likely never play spaces this big again, and we're still getting our festival legs. As many people might imagine our sound isn't exactly catered to a massive outdoor setting, but we are giving it our best. Playing Montreal was insane, the biggest crowd we've ever played for, about 30K people actually in the pouring rain, just incredibly amped up for Radiohead. It was extremely surreal. A rainbow came out as well at one point.

Radiohead. Playing with Paul Simon was great, but this Radiohead tour is sort of a lifetime dream.

Baltimore all the way.

Have you seen Iggy Pop's gear?

No! But he trashed the dressing room we were supposed to have in Montreal because he was understandably pissed. We've been robbed before, it sucks.

Are you looking forward to All Points West?

Totally! I have no idea what to expect, every festival is organized so differently and some can be really great and some can be hell on earth. We'll just have to wait and see how this one fares compared to others....seems like it's going to have an amazing backdrop of the city though.

Why are you playing a separate show during the second night of All Points West?

We'll be home. We've been doing shows in between Radiohead shows to make a little money to pay for the bus we got (our first ever), and we haven't played Williamsburg as a headliner since Glasslands way before Yellow House came out. Seemed like a fun thing to do. We are donating portions of the proceeds to that specific charity because our friends at Daytrotter wanted us to come out to Iowa to play for the cause, but we were busy with this tour so that's when we decided we should do a show to help out a bit. I'm really glad we did too, I was excited to learn it sold out in a few hours as that's never happened to us before. Usually there are plenty of scraps to go around, haha.

I've been hearing that your sets consist of a lot of new material. When can we expect a new record?

Early 2009 I'm hoping for. We're about half way done recording it and we'll get right back to it after this tour ends. It's really fun for us to test out all these new songs on this tour. Definitely makes performing feel fresh again.

Just one with Feist for a Red Hot compilation.

Thanks! And finally, what are you listening to right now?"

For an older inteview we did with Ed, check HERE.