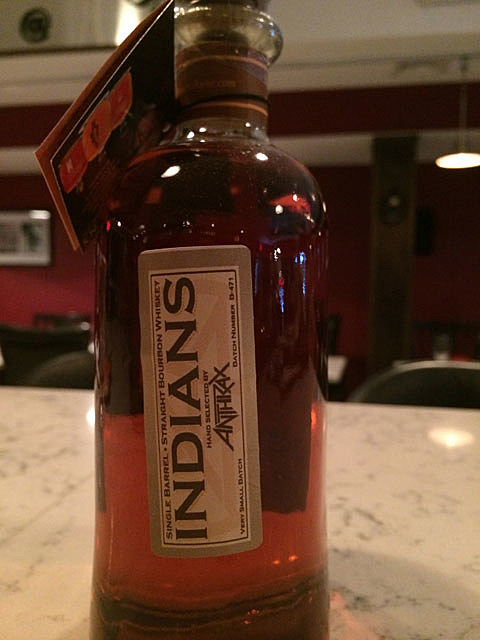 You may not even realize metal legends Anthrax released a new album this year. That's because they didn't (they're planning for one next year though), but that didn't stop them from being nominated for a Grammy for a cover of "Neon Knights" they recorded for a Dio tribute album. It's actually their sixth Grammy nomination, and their third since 2011 which is the last time they put out a new LP. Being the 12th best metal band to ever walk this earth, not to mention placement in the 'Big Four', has its benefits (sorry Pallbearer!).

What better way for the members of Anthrax to celebrate their sixth Grammy nomination than to toast it with a glass of their own brand of bourbon, "Indians."

Anthrax has aligned with Jefferson's Bourbon, the Kentucky-based company that produces special, limited edition "small batch" whiskeys by blending a variety of aged bourbons and rye whiskeys. Anthrax's "Indians," a single barrel bourbon, was personally chosen by the band and will taste like no other due to its particular blend and the barrel it was aged in.

"We've been wanting to come up with a special item like this, something that was unusual, one-of-a-kind, not a t-shirt or hoodie or poster," said the band's Frank Bello "and 'Indians' was perfect."

Anthrax's "Indians" bourbon is now available exclusively through Atlantic City Bottle Company - http://acbottlecompany.com/ . "Indians" will be priced at $75 per bottle (in-store pick up) and $100 (shipped to an address) and will come with a signed piece of the stave of the barrel that the bourbon was aged in.

Here's the teaser for the upcoming Anthrax album:

And they've got tour dates (including NYC) supporting Volbeat...