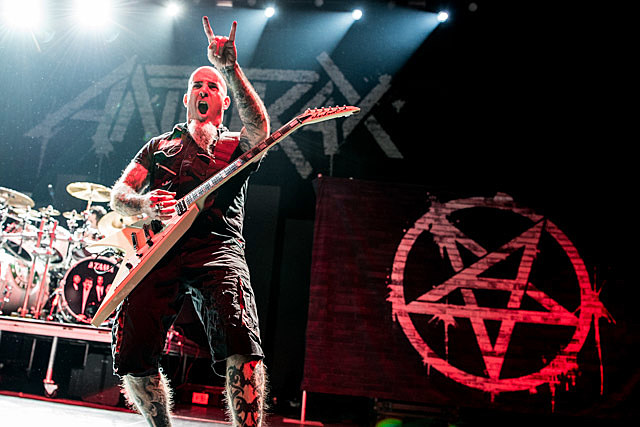 The ongoing saga of Phil Anselmo's racist comments and the fallout thereof continue, as members of Anthrax have taken to defending Phil. This relationship is of particular interest, as Scott Ian and the band have a longstanding relationship with Pantera, have been openly supportive of social justice issues in the past, and have been especially critical of Phil's actions since the incident at Dimebash. But in a recent interview with the Australian radio show "Moshpit," Anthrax drummer Charlie Benante said that he doesn't think Phil is a racist:

I think Philip made a mistake. I think there were other things... other factors involved in that situation that people probably didn't see. And I've known Philip Anselmo forever, and I don't think Philip is a racist. I just think he's become the poster boy for this. And I know it shocked a lot of people and it pissed off a lot of people. But I think he's genuinely sorry for saying anything like that. And, yeah, he's my friend.

You can check out that full interview below.

Scott Ian has now also come to his (measured) defense, somewhat clarifying and contextualizing his earlier criticisms of Phil in an interview with the blog Sticks for Stones:

My attitude towards the whole thing was, to me, silence is complicity. If you don't say something about something like this, then you're condoning it, and I can't condone that in any way, shape or form. It's not okay in any world, let alone the metal world, to do these kind of things in any type of context, because words are too powerful, especially Phil Anselmo's words, because there's too many impressionable people out there who listen to every fucking thing that he says. So, you know, bottom line is he needs to prove that he should be forgiven, and the only thing that will prove that is his actions. And I am, of course, willing to give him the opportunity to prove that, because, like I said, he's like my brother. So I didn't write him off. I talked to him about it, and I have every hope inside of my heart that he will prove to the world that he is not this person.

Read the rest of Scott's interview here and check out that Charlie Benante interview below...