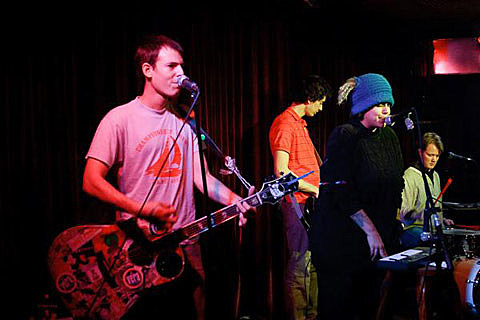 Like Dan Deacon, a band called the Bundles are playing the Cake Shop anniversary celebrations this month. Their show is on Wednesday, May 12th.

The Bundles are fronted by the anti-folk dream-team of Jeffrey Lewis and Kimya Dawson, and include drummer Anders Griffen, Jack Lewis (Jeff's brother and band-mate) and K Recs' Karl Blau. Their debut self-titled record came out on K Records in April.

Also on the Cake Shop bill are the controversially-named Sidewalk Cafe staples Ching Chong Song and Only Son (ex-Moldy Peaches guitarist Jack Dishel), as well as a mysterious "Secret Guest". Who could that be? Well, two members of the Moldy Peaches are listed on the bill already, Kimya headlining would sort of be a bigger deal than her new band, Moldy Peach Adam Green is sort of big (he just did two nights at Bowery), so my guesses are:

1) Moldy Peaches (seems unlikely though right?)
2) Kimya Dawson (but why be secret when you're already on the bill?)
3) Adam Green (bigger, but does he need to be a secret?)
4) Beck (just kidding)
5) Regina Spektor

My last guess, Regina Spektor, also got her start at places like Sidewalk Cafe and has toured with Only Son more than once. I have no idea really. What do you think?... UPDATE:

hey guys, andy cakeshop here...just so theres no confusion, its not adam green.. i was throwing the idea around with his management, but it was really just an idea. the bills really strong on its own, and i should really take off the 'secret guest' thing, its been a weird week and sorry it got to this level. jeff and kimya need to play at 8 to make it to a prior commitment...anyway we're working on something cool for the 11pm, but as of yet, truthfully, its not booked! sorry for the mixup &
thanks everyone.
love, andy

"SECRET GUEST!" has now in fact been replaced with "TBA". It was fun while it lasted.

The Bundles tour the UK and Europe later in May. Those dates and videos are below...

The Bundles kimya and jeffrey lewis play at first unitarian