Antibalas in Philly on 6/6 (more by Tim Griffin) 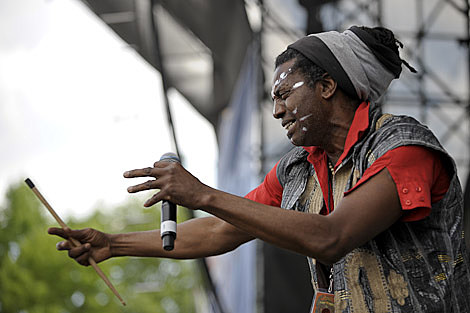 Much like The Roots, who they shared the stage with at The Roots Picnic in June, have been doing lately, Antibalas will play a NYC residency. Theirs will take place at Knitting Factory in Brooklyn over four Thursdays in December (they exclude Dec 24th), culminating in a New Years Eve show. Tickets are on sale for the 12/3 show, the 12/10, the 12/17 and the New Years Eve show. Antibalas is also scheduled to appear at the Winter's Eve Festival on 11/30 along with Joy Behar. Yes, that one.

Members of Antibalas are also notably a part of the Broadway musical FELA! based on the life of the Afrobeat legend, and produced by Jay-Z and Will Smith/Jada Pinkett-Smith.

A provocative hybrid of dance and Broadway musical, FELA! features the Afrobeat music of Fela Anikulapo-Kuti, a book by Jim Lewis... arrangements by Aaron Johnson and Antibalas with direction and choreography by Tony® Award winner Bill T. Jones...
FELA! uses stirring Afrobeat music (a blend of jazz, funk and African rhythm and harmonies), to tell the story of Kuti's controversial life as artist, political activist and revolutionary musician. Featuring many of Fela Kuti's most captivating songs and Bill T. Jones's visionary staging, FELA! is the most original new musical on Broadway.

Lots of familiar faces on stage during the show which also includes Knitting Factory and Questlove (one of the producers) in its credits. Head on down to catch it at The Eugene O'Neill Theatre, but before you buy, make sure and use Antibalas's discount code FE4NFP9. Questlove (via Okayplayer) is running a promotion too.

Some related videos below...