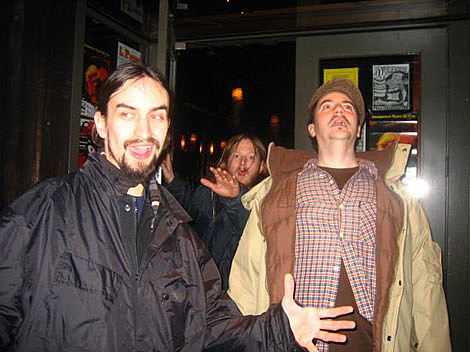 Due to over-whelming demand from their near sold-out [December 18th] Anticon 3rd Annual 10 Year Anniversary show, the Knitting Factory NY adds a 2nd, more intimate Anticon collective event for Wed, Dec 17th in their Tap Bar! Limited to only 200 tickets, and at an amazingly accommodating 'Recession Rate' attendees can purchase an advance ticket for only $5.00!

Tickets are also still on sale for the bigger and more expensive party.

DJ Thanksgiving Brown is also the latest addition to New Years Eve at the same venue, AND he's hosting the Souls of Mischief show there on Tuesday, AND, according to his MySpace, he'll be at the last Variety Shac comedy show, and at the final KF hip hop show with Rakim.

Video of Jel playing "Sweet Cream In It" in his bedroom, below...