Antidote at The Bell House, Feb 2010 (more by Tod Seelie) 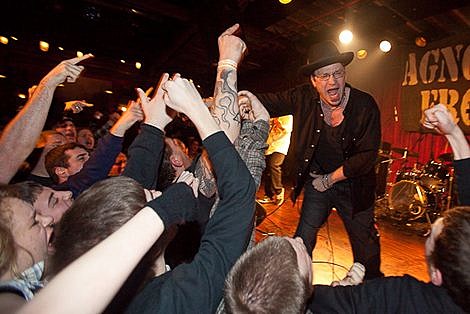 While an album every 21 years is hardly "productive output,"  I'll nevertheless take it from  veteran hardcore crew Antidote who are celebrating their thirty year anniversary with the release of No Peace in Our Time, a new LP. Due on November 13, the 10-song long-player features nine fresh offerings and an appearance from Roger Miret (Agnostic Front) on a cover of the Black Flag classic "Rise Above."

In the meantime, Antidote is preparing to play a few dates and. NYCers can look forward to Antidote at Bowery Electric on Dec 2 with The Mob, Citizens Arrest and Urban Waste. Ticketing info is on the way  and tour dates are below.

In keeping with legacies in hardcore, H2O will celebrate the 15th anniversary and re-release of fan favorite Thicker Than Water with a show at Music Hall of Williamsburg on December 27 that has them playing the LP in its entirety. Tickets are on sale, "special guests" are still TBA.

In more modern hardcore news The Morgan (250 Varet St in Brooklyn) in is holding a trio of hardcore shows at its space in the coming weeks. Look fot the space to host Cruel Hand, Suburban Scum, Paper Trail, Zombie Fight, Provider and Blind Justice on Oct 28, then Trial, Incendiary, Hollow Earth, Rude Awakening, Jukai, and Problems on November 11, and the infamous Skarhead with Wisdom in Chains, Born Low, Living Laser, King Nine and Detriment on 11/10. Mosh.

All Antidote tour dates and a stream of the classic Thou Shalt Not Kill are below.