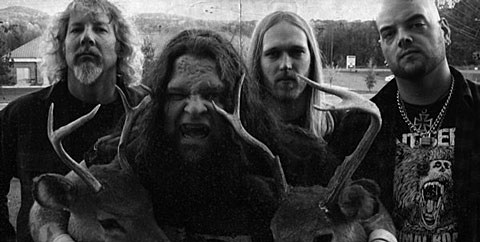 Antiseen guitarist Joe Young has died. He was 54.

Started in 1983, Charlotte's Antiseen always wanted to stand apart from, and piss off, the reigning punk pack, going so far as to mention it right in the band name: 'anti-scene.' The group favored simple, power-chord assaults in the vein of The Stooges. Their music was aggressive, their lyrics controversially antagonistic, and their live show was confrontational, drawing their share of praise from peers owning a similar mindset. One in particular was GG Allin, who the band collaborated with on Allin's 1991 release Murder Junkies. They would also later collaborate with Hank Williams III. But, Antiseen weren't mere hired guns. They released records frequently, racking up a total currently standing at 84 according to Discogs.

Away from the outfit, Joe Young released an EP, Bury the Needle, in 1988. He was also politically active, running for city counsel and state house as a libertarian.

To get a feel for Antiseen and Young's contributions, you can watch the 'destructo' finale from their 20th anniversary show in 2003 and listen to the 1996 LP version of the song they released through Sub Pop's Singles Club in 1992, below...