The Antony show at Town Hall last night was not lacking in bloggers.

* Manic Mess was the person (people) I saw leave early. I seriously couldn't believe it. The people who moved into her seats before the encore were happy.
* Central Village says NOT "best show ever."
* Modern Age accuses me of "stealing" and "climbing." 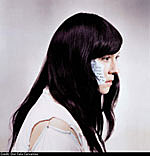 "The concert was truly spectacular, just magically good--it was at the Town Hall, every seat was full and everyone in the audience was completely mesmerized," says Jenny D

"Antony and the Johnsons was the most beautiful concert I've ever seen, with the most silent, enthusiastic, attentive, obedient audience I've ever seen, which is really something because it was 4,000 hipsters," says Pigeon in the Sun

"Antony’s set was a retrospective ranging from songs off his first EP The Lake (“Fistful of Love” and the title track) to cuts off of I Am A Bird Now - but the highlight was definitely the grip of covers Antony and Co. kept springing on us. We’re talking Leonard Cohen’s “The Guests”, some Nico and some Moondog, and the encore tear-fest that was Lou Reed’s “Candy Says.” Catharsis!" says Fader

" I was a lil wary that his holyfuckingshit!, amazingly adaptive timbre would translate to the stage. I quickly realized I was a fucking retard." says Michael

BEST SHOW EVER (for now)