"I am plainly shocked that the record has been number one in Europe this week, and I want to pause and thank all the people around the world that made that happen, and who have supported me with so much heart over the last few years, and come to my shows, and collected up all the press from around the world on the justonestar website, and wished me well, and shared some time with me at live shows. Thank you for urging me forward through a glorious dream, the likes of which is more your creation than mine. Antony x" 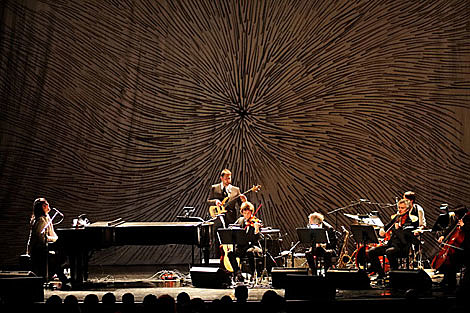 "The Crying Light," easily the highest charting of the U.S.-based act's three albums, makes a series of eye-catching debuts across the region. It's in at No. 2 in Spain and Sweden, No. 3 in Denmark, No. 4 in France, Holland and Norway, No. 9 in Italy and No. 18 in the United Kingdom, the latter with sales of 10,000 units. It also climbs 2-1 in the Belgian region of Flanders.

"Light" is the follow-up to 2005's "I Am A Bird Now," which won the U.K.'s Mercury Music Prize for the group led by New Yorker Antony Hegarty. It qualified for the prize because Hegarty was born in the U.K." [Billboard - January 29, 2009]

Antony was on WNYC on February 8th. Listen to that here. Tonight, February 19th, Antony kicks off his two-night run at Town Hall in NYC. In April he plays Coachella. Last night he was on Letterman. That video, and more, below...

Feb 2 Setlist (via Spin):
"Her Eyes Are Underneath the Ground"
"Epilepsy is Dancing"
"One Dove"
"For Today I Am A Boy"
"Kiss My Name"
"Everglade"
"Another World"
"Shake That Devil"
"The Crying Light"
"Crazy in Love" (Beyonce)
"Fistful of Love"
"You Are My Sister"
"Twilight"
"Aeon"

Encore
"Cripple and the Starfish"
"Hope There's Someone"