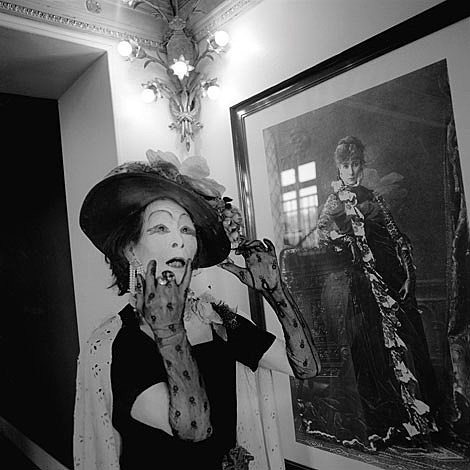 Antony and The Johnsons Another World Teaser

Antony and the Johnsons have just released a trailer for the title track from their forthcoming EP "Another World" (October 7, Secretly Canadian). On "Another World", Antony lists things he treasures about the natural world, and expresses that he will miss them; the result is hypnotic and affecting, with the accompanying video reflecting the song's theme....

The EP Another World also includes "Shake That Devil". Part exorcism and part Shangri La, Antony calls out perpetrators, and banishes them one by one.

Two other songs, "Crackagen" and "Sing For Me" are pastoral and surreal. Finally the epic "Hope Mountain" closes the EP; an episodic narrative set after a flood; people gather on a mountainside to witness a girl walking on the water.

Another World Tracklist
1. Another World
2. Crackagen
3. Shake That Devil
4. Sing For Me
5. Hope Mountain

Antony and The Johnsons - a new song for Prada

The fine fashion folks at Prada teamed with Antony & The Johnsons to commemorate Prada's Fall 08 collection. Together they created a very special video collaboration, titled Fallen Shadows, which was produced by visual effects director James Lima. The music featured in the video is Antony & The Johnsons' "Great White Ocean" that was written specifically for the video. The forward-thinking Antony once again lives up to his repution of creating some of the finest things in music. [Arjan]

I'm not a fan of Prada, but I still love Antony and can't wait for the new releases, or the upcoming show...