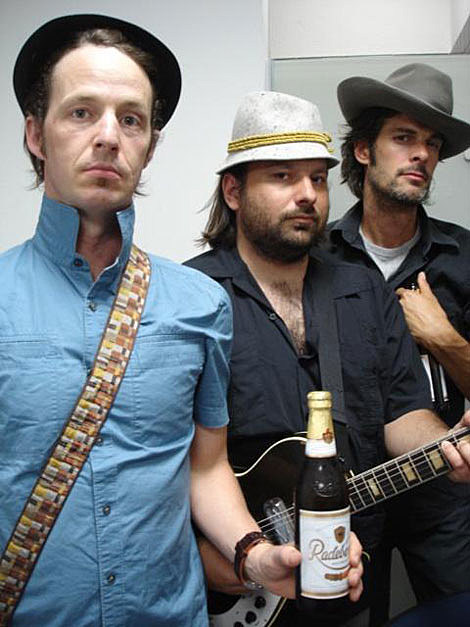 Apostle Of Hustle, a.k.a. Andrew Whiteman of Broken Social Scene with bassist Julian Brown (Feist) and drummer Dean Stone (Sarah Harmer, Amy Millan), will play the Bowery Ballroom in NYC on Wednesday, June 10th with Forro in the Dark. Tickets go on AmEx presale today at noon, and general sale Friday at noon.

Before then, Apostle of Hustle has a short late-May tour around his homebase of Toronto, Ontario. That's right around the release of AoH's new album, Eats Darkness, out May 19th on Arts & Crafts.

"Recorded in Toronto, and working once again with renowned producer and sound technician, Martin Davis Kinack (Sarah Harmer, Broken Social Scene, Hayden), Eats Darkness is based on the notion that the greatest art is often drawn from the darkest of experiences - consuming darkness to expel light."

Apostle of Hustle is also on the bill for the Olympic Island Festival on July 11th. Also playing is Broken Social Scene, Explosions in the Sky, Beach House and more. The annual fest takes place on the island of the same name, which is near Toronto. Tickets (which include a ferry ride from downtown Toronto) are on sale. More details below.

The Constantines, whose new album Too Slow For Love was released by Arts & Crafts on March 17th, are opening for Explosions in the Sky at Central Park Summerstage.

All AoH tour dates with Eats Darkness art and track list, and Olympic Island info, below... 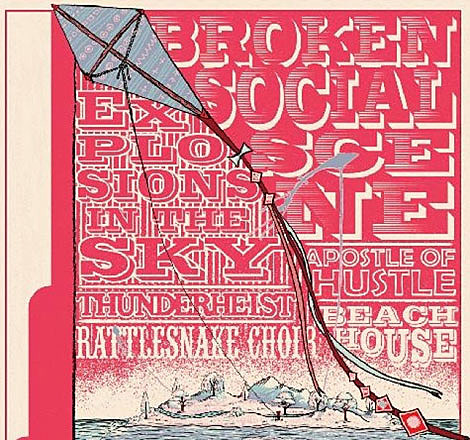 Broken Social Scene is proud to announce their return to the Toronto stage this summer. The band will headline an all-day event under the beautiful setting of Toronto's Olympic Island.

All tickets for this event include return ferry travel from the Toronto Ferry Docks (Queens Quay/Bay St.) in downtown Toronto to Olympic Island, just steps from the venue fairgrounds. Tickets go on sale to the general public starting Friday, April 17 at 10am. 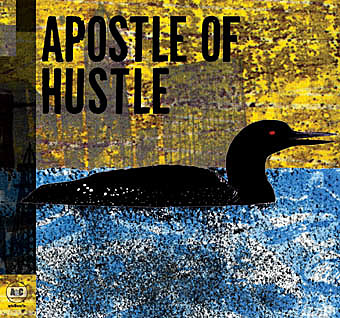 Eats Darness track list:
snakes
eazy speaks
soul unwind
sign
perfect fit
xerses
what are you talking about?
whistle in the fog
eats darkness
return to sender
how to defeat a more powerful enemy
nobody bought it
blackberry