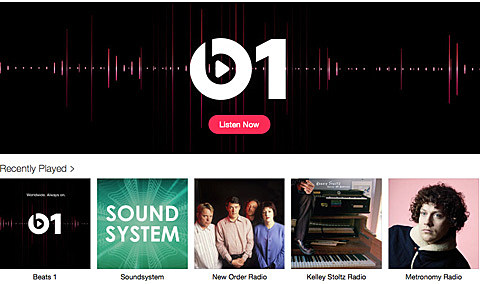 Apple Music, the new streaming-radio-social-etc platform from the iTunes/iPod/iPad/Macbook folks, launched Tuesday (6/30) on IOS devices, and today (7/1) it was included with the brand new version of iTunes. It seems to want to take on Spotify, Rdio, Pandora, Sirius/XM and everything else in one fell swoop. It features personalized "radio stations" based on an artist you like, or your music library, and they offer curated playlists from artists (like St. Vincent) and influencers (like Pitchfork) -- though finding them on Apple Music is not so easy, currently. You can listen to Thom Yorke's solo records on Apple Music (it's not on Spotify) and AC/DC who just agreed to put their music on various streaming platforms yesterday. Dr. Dre's The Chronic is exclusively streaming on Apple Music too. You can check out Apple Music with their three-month free trial.

More interesting, to me at least, is Beats 1 Radio, a live radio station (well, at least 12 hours a day currently) broadcasting from NYC, LA and London and featuring shows by Zane Lowe (who left BBC 1 for Apple), Hot 97 personality Ebro Darden and Rinse FM's Julie Adenuga. There are also shows hosted by St. Vincent and QOTSA's Josh Homme. It feels very freeform -- at one point today Zane Lowe followed a cut from noisy UK indie band Spring King with A$AP Rocky's "Everyday" -- but very pro radio sounding (sound effects, talking all over the songs) at the same time. The station is spearheaded by Trent Reznor (who worked for Beats before Apple acquired it) and he talked to Rolling Stone about his involvement:

I think having access to all the music in the world is great, but it then starts to place a burden on what the experience is like navigating through, now that you have access to everything," Reznor explains. "I think that naturally places the burden on having an experience be great. I want that feeling of walking into an independent record shop, if there are still any that exist, like Amoeba [Records], and being delighted by the choices and the way music is presented to you with love and care. It's exciting. And you leave with stuff you wouldn't have dreamed you wanted and you're excited to listen and share it and experience it.

Beats 1 can be listened to without subscribing to Apple Music, by the way, and you can make requests.

As for the social aspects of Apple Music, there is a "Connect" feature that allows musicians to upload songs, videos and photos that aren't already within Apple Music's system. For example, when I clicked on "connect," I was shown that Sonic Youth have offered up a live version of "Shaking Hell" (cool) and that Belle & Sebastian had uploaded a photo (shrug).

Is any of this enough for you to try it out or cancel your Spotify account? Apple Music doesn't work on Sonos systems yet but the wireless speaker manufacturers are promising compatibility by the end of the year.