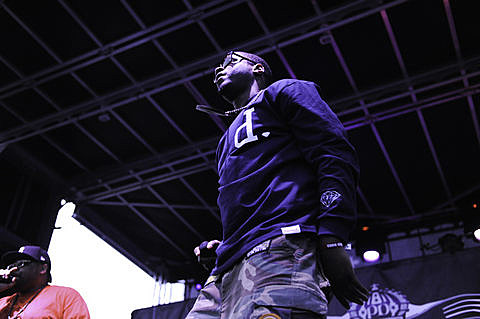 June is Black Music Month, and Apple is celebrating with a series of intimate live shows at Apple Stores across the country. And for the fan who wants to get closer, we'll also be hosting Meet the Musician events -- your opportunity to ask questions and speak with select artists right in our store.* Browse store locations on the right to see who's appearing in your neighborhood. To hear more from this amazing and diverse group
of artists, visit Black Music Month Live on iTunes today.

As quoted above, Apple Stores nationwide are hosting in-stores in celebration of Black Music Month this month and NYC will be getting theirs at Apple Store SoHo, Apple Store Upper West Side, and Apple Store West 14th Street. The first one is TONIGHT (6/5) at the SoHo location with Apollo the Great, Freeway, and Sean Price. Others include Beanie Sigel in the SoHo store on 6/19, Ziggy Marley in the Upper West Side store on 6/18, and the West 14th Street store will get Big K.R.I.T. on Thursday (6/7), Robert Glasper on 6/21 and Slaughterhouse on 6/30.

Some of the events, including tonight's show, the Beanie Sigel show, and the Big K.R.I.T. show require wristbands. "Pick up yours early on the day of the event, as space is limited and wristbands are given out on a first-come, first-served basis at the host Apple Store." The full schedule of in-stores is below.

Speaking of Big K.R.I.T., he finally released his first official album after a long onslaught of mixtapes. It's called Live From the Underground, and its out today (6/5) via Def Jam. It features guest appearances from Bun B, Devin the Dude, Big Sant, B.B. King, 2 Chainz, and others. Stream it in full at NPR.

The flyer for tonight's in-store and the entire Apple Store Black Music Month schedule are below. 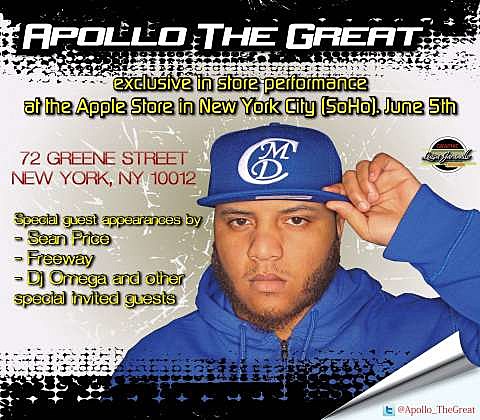