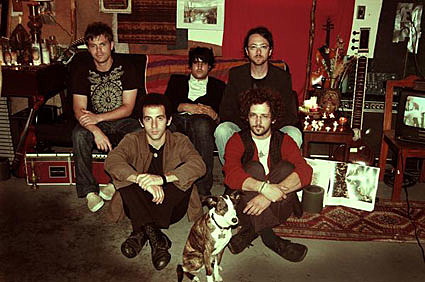 One of the lesser known bands in the lineup of the upcoming ATP NY festival is Apse. Aspe are also one of a handful of bands in the ATP Recordings stable that are also making an appearance at the festival. The Drones, Fuck Buttons, Alexander Tucker, and Bardo Pond are the other ones that fall into that category.

Apse has existed in one form or another since 1999, but until 2006 they only put out EPs (Untitled, Cloud, Three Dialogues, and Apse EPs). In 2006 the band dropped the longplayer Spirit on Spanish label Acuarela Discos. ATP Recordings picked up Spirit and re-released it domestically with a bonus track on August 19th of this year (this week). The band is currently working on the follow-up to Spirit, the limited vinyl-only Eras. Peep the video for "The Gloom" from Eras below. Also check out the massive "Wind Through The Walls" from Spirit (downloadable above), "The Gloom" video below, and the gang of songs (including "Wishlist" from the upcoming Eras) streaming at their myspace.

Like many bands playing ATP NY, Apse also have a NYC show coming up. They're playing Cake Shop on September 22nd - one day after ATP. Low (also playing ATP) is at Mercury Lounge right down the street that same night (and at Union Hall one night after that). My Bloody Valentine (also playing ATP) are playing that night too, but further uptown (and then playing at Roseland again the night after that as well). Low is now sold out. My Bloody Velentine is not.

Apse - "Wind Through The Walls" Video