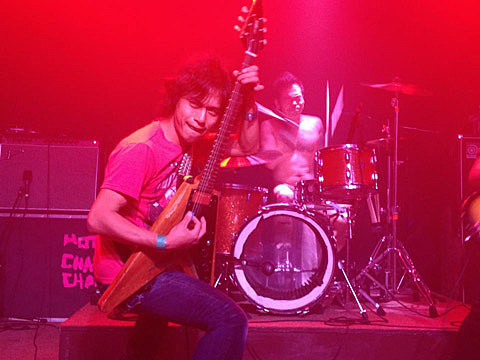 After a show at Death By Audio earlier this month, Japan's Electric Eel Shock are returning from a trek down to SXSW with Peelander-Z. Their first trek in the US in six years is almost complete, but they have a few shows left on their itinerary with Hot Cha Cha that include a final show at Cake Shop on March 25th with The Vandelles, Hard Nips and DJ Eric Davidson (Livids, New Bomb Turks). $8 gets you in.

Hard Nips are also on board for the four-day Aputumpu Music Festival that will take place across four venues in NYC over the next four days. The party kicks off TONIGHT (3/22) with a show at Shea Stadium featuring The Suzan, Radical Dads, Osekre & The Lucky Bastards, Habibi, and The Toothaches and continues with shows at Public Assembly, Cameo, and a headlining appearance from Japanther at LPR. Tickets are on sale for the entire weekend.

The full festival lineup with all EES tour dates and some video of EES's metal-punk party vibes, below... 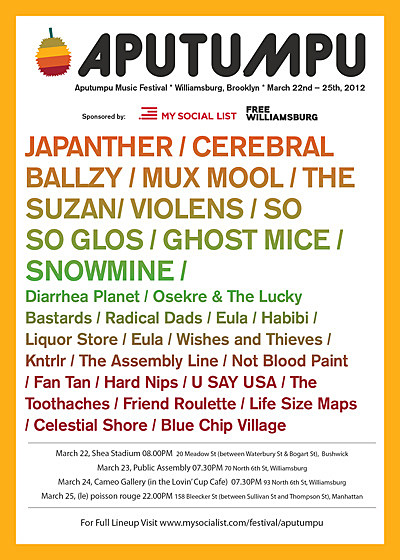 The Aputumpu Festival is a musical showcase featuring more than two-dozen rising bands comprising a cross-section of the burgeoning Brooklyn music scene. Much like the Amputumpu fruit - sweet on the inside, but rough on the outside - these bands exhibit raw, noisy, in-your-face performances, in contrast with the deep and often heartfelt sentiments expressed in their music. The bands' rough, DIY aesthetic will be displayed over the course of four days, spread across some of the best venues in Williamsburg and Manhattan.

Electric Eel Shock - SCREAM FOR ME