AraabMuzik at Moogfest in October (more by Diana Wong) 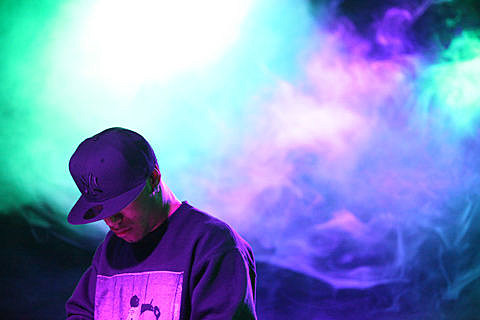 When Altered Zones announced last month that they would no longer be operating, editors Ric Leichtung and Emilie Friedlander also announced a new project, AdHoc.fm, which will be "a 100% independent, daily music and visual culture publication" and is "coming in 2012."

Ad Hoc are throwing a New Year's Eve party at 285 Kent (12/31) with sets by AraabMuzik, Balam Acab, Light Asylum, Laurel Halo, Run DMT, a special guest, and Weird Magic DJs. Tickets for the show are on sale now. More details and dates are below.

Laurel Halo will also be DJing in NYC on New Year's Eve at Zebulon with DJ Hiro Kone and a band TBA. They'll be spinning "Italo Disco, House, Soul, Techno, Postpunk; whatever makes you move."

Another similar electronic-filled NYE option is the Nosaj Thing show at Glasslands (12/31). When we first discussed the show, no openers had been announced yet. We now know that the bill also includes El Topo (aka Dave Harrington of Nicolas Jaar's Darkside project), Archie Pelago, and DJIlirjana (Pop Manifesto/Typical Girls). Tickets are still available.

Speaking of AraabMuzik, he released the deluxe edition to his album Electronic Dream last week. The album features six new tracks, including the Deadmau5-sampling "I Remember," which you can stream below. We recently spoke to Gang Gang Dance engineer Sean Maffucci who is in New Moods, and he said "I don't think I've heard a record like this before. It seems to break every production rule and yet sounds so sweet and pleasing to the ears."

That stream, NYE show details and more AraabMuzik dates, below...