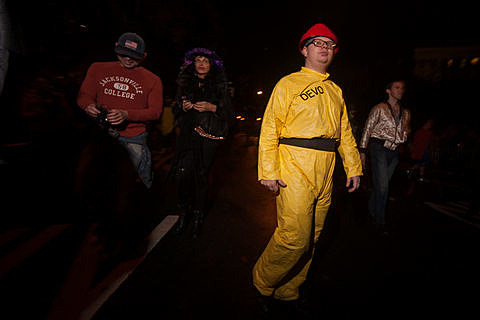 The electronic elements of Arcade Fire's new album Reflektor have gained it some comparisons to other electronic rock records of the past, like Talking Heads and David Bowie of course, but also Devo, who Arcade Fire (in their "Reflektors" alter-egos) covered at their second of two LA shows last night (10/31). They took on "Uncontrollable Urge," the opening track of Devo's 1978 debut LP, Q: Are We Not Men? A: We Are Devo!. The cover stays pretty faithful to the original, which isn't a bad thing in this case. It looks like it was a fun time.

If you missed them, check out pictures and videos of Arcade Fire's first night in LA.

Watch the video of the Devo cover (via Stereogum) below...