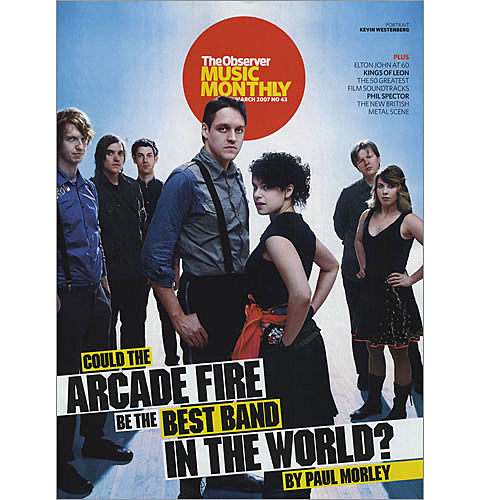 And the nominees for "Album of the Year" are:

Also funny: Mumford & Sons are up for Best New Artist against Justin Bieber (and Drake, Florence & The Machine, and Esperanza Spalding)

Robyn is up for Best Dance Recording against Lady Gaga (and Goldfrapp, La Roux, and Rihanna).

Arcade Fire are also nominated for Best Rock Performance By A Duo Or Group With Vocals against Muse, Kings of Leon, The Black Keys, and... Jeff Beck & Joss Stone.

The Black Keys also landed in the "Best Rock Instrumental Performance" along with... Dave Matthews.

The Black Keys and Mumford & Sons and Kings of Leon and Muse are also all in the "Best Rock Song" category.

So they give that to Arcade Fire, since Lady Gaga will probably get Album of the Year, or maybe Arcade Fire will just get screwed and they'll give it to someone on a major.