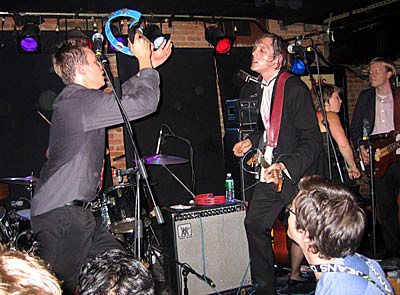 Arcade Fire have been fairly quiet about their forthcoming, third album. Small tidbits have leaked out, like the fact producer Markus Dravs is working on it and that it is complete. Similarly, their summer tour dates are mostly unannounced, though Lollapalooza will be one stop. Now the band's website has been updated with a list of mainly-European summer shows. Three are in North America - Lollapalooza on August 8th, Montreal's Osheaga Festival on July 31st (the closest to NYC), and the Ottawa Bluesfest (July 6-18). The other headliners at Ottawa's massive annual fest include The B-52s, The Swell Season, The Flaming Lips, Passion Pit, Iron Maiden, Rush, Kevin Costner & Modern West, and Weezer. The full lineup is below.

In other Arcade Fire news, they're reportedly working with Spike Jonze on a short film.

"the only bits of information I've been able to uncover from official sources is that the project is another short film. It seems like Spike isn't off his short film kick just yet (if you haven't already, check out his robot love story I'm Here and We Were Once a Fairytale starring Kanye West). I also learned that the film is a collaboration with the band Arcade Fire. You might recall that Spike used Arcade Fire's "Wake Up," from their 2004 album Funeral, in the trailer for Where The Wild Things Are. No word on the length or what the official title might be. Thanks to /Film reader Sam for the tip."

We also just realized that Arcade Fire band member Sarah Neufeld has been a member of the Luyas, who are in town for shows, since 2009. She only gets to play with the Luyas when she's not working with Arcade Fire though. She'll play at their private show tonight (4/21), but not at any of the other shows that the band plays this week (Glasslands, Sycamore, Webster Hall & one more TBA!). Sarah also plays in Bell Orchestre with Richard Perry of Arcade Fire, Stefan Schneider of the Luyas, and Pietro Amato of the Luyas (who is also in Torngat and sometimes Arcade Fire). Another sometimes Arcade Fire member, Owen Pallett, plays Webster Hall on Thursday with The Luyas.

All current Arcade Fire tour dates and the full Ottawa Bluesfest lineup are below...