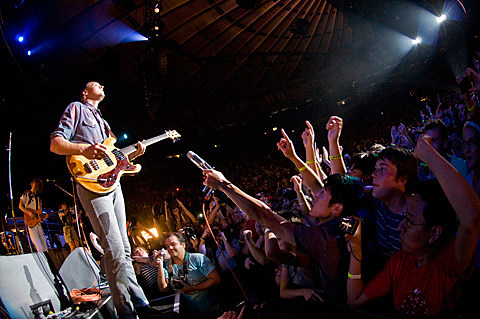 "Now our parents will get off our backs about getting a real respectable job!!!!!"--Win Butler

Arcade Fire's critically acclaimed opus The Suburbs has been nominated for Album Of The Year, arguably the highest possible honor of the 53rd annual Grammy Awards.

The Suburbs has received a total of three nominations: Album Of The Year, Best Rock Performance By A Duo Or Group With Vocals for The Suburbs' "Ready To Start" and Best Alternative Music Album.

Reached for comment in London, where the band is in the midst of a two-night stand at the O2 Arena, Arcade Fire's Win Butler said, "We are very proud of the record we made and feel incredibly blessed that so many people have gotten it! For those of you who don't understand how gambling works, if something is 100 to 1 odds and you put down 10 dollars, you win 1000 dollars... I'm just saying."

The Suburbs was released August 3, 2010 on Merge Records, debuting at #1 on the U.S. Top 200 and selling nearly 400,000 copies as of press time. The record has been supported by an extensive world tour that has included two nights at New York's Madison Square Garden and a November 13 appearance on Saturday Night Live. The current run of dates will conclude December 12 in Glasgow.

More about this year's nominations HERE.