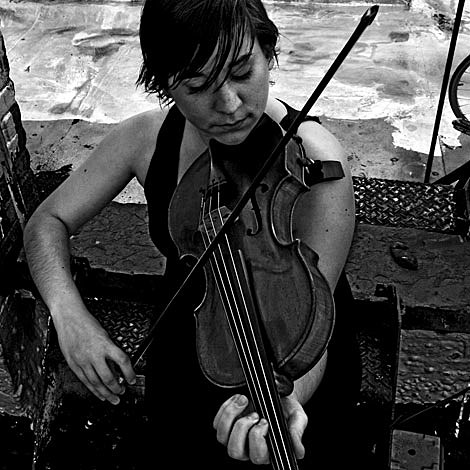 There were (more) strings at September 25th's inaugural show for the Archipelago music series, which happens at Galapagos one Friday a month through next May. Like the Undiscovered Islands fest in May, the shows will be featuring music that crosses boundaries between classical, indie, etc. (and like that fest, it's also being set up by the New Amsterdam label.)

The full schedule is below. It's full of treats (like a way-off show with music by Shara Worden aka My Brightest Diamond in April). The first show featured violist Nadia Sirota and percussion quartet Line C3. Coincidentally, Worden and Nadia will both be playing with the Dessner Bros.' BAM Next Wave show, The Long Count, at the end of October.

Both acts on the first night performed works by Nico Muhly (Line C3 did "Ta and Clap," written by Nico for them in 2004, and he joined Nadia for his piece "Keep in Touch," which features a vocal sample from Antony Hegarty of Antony and the Johnsons). Nadia & Nico actually discuss their collaborations in an episode of New Amsterdam's Podcast series.

Speaking of New Amsterdam, they also have a CMJ showcase coming up with Cantaloupe Records at (Le) Poisson Rouge on October 21st. Tickets are on sale. That will feature the music of David Lang and Julia Wolfe (Bang on a Can co-founders) and performances by NOW Ensemble, Darcy James Argue's Secret Society and more. Clips of the Lang-scored film (Untitled) will be screened between performances (the soundtrack of which will be out October 13th).

Full details on the Archipelago series below... 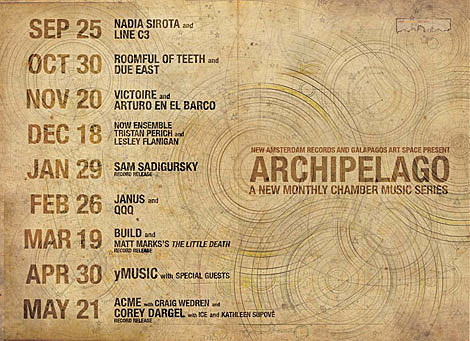 On one Friday evening each month from September to May, Archipelago will focus on augmenting the enveloping intimacy and warm grandeur of Galapagos, one of New York City's most uniquely beautiful venues, with a presentation of accessible yet sophisticated cross-genre chamber music. Like the "Undiscovered Islands" series, each Archipelago event will feature world premieres and/or record releases from New Amsterdam's current stable of artists and beyond. Archipelago will offer a new perspective on the indie classical community, focusing on small ensembles with an acoustic bent, including new work from established New Amsterdam veterans like NOW Ensemble, QQQ, Build, and Nadia Sirota; rising stars such as yMusic, Victoire and janus, all debuting work from their upcoming New Amsterdam releases; genre-blending chamber/rock presentations from two of the outstanding contemporary music ensembles of their generation, ACME and ICE, paired with vocalist/composers Craig Wedren (Shudder to Think) and Corey Dargel; a special tour-concluding visit from Tristan Perich and Lesley Flanigan, who fold the sounds of harpsichord and voice into their unique electronic soundscapes; and first-time New Amsterdam performances from the ambient chamber ensemble Arturo en el Barco, the flute and percussion duo Due East, the poly-stylistic a cappella vocal group Roomful of Teeth, and the percussion quartet Line C3. Archipelago will also feature three special record release events, starting in January with Sam Sadigursky's The Words Project III, and moving on to Matt Marks's The Little Death - A Post-Christian Nihilist Pop Opera in March and Corey Dargel's Removable Parts/13 Near-Death Experiences in April. Along the way, the series will include special guests, drink specials, afterparties, and exclusive merchandise - all taking place in New York's most awe-inspiring place to hear new music.