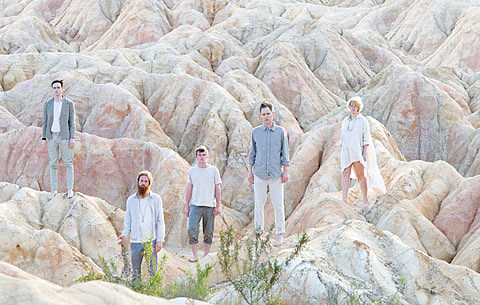 Australia's Architecture in Helsinki will head to the US to play some dates in June with Hooray for Earth, including Webster Hall on June 16th, Tickets are currently on AMEX presale and go on regular sale Friday at noon (1/28). Though full details are forthcoming, the dates look to be part of a full US assault, and most likely in support of the band's upcoming LP Vision Revision which the band finished last year.

Hooray for Earth supported The Concretes at Bowery Ballroom on Saturday (1/22) and the band will hit the road to head toward SXSW with A Place To Bury Strangers. Both APTBS and HFE have shows at Glasslands in the coming weeks. APTBS will play the previously-mentioned and now-sold-out show at the venue on Saturday 1/29 with Beach Fossils, Caveman, Guards, ARMS, and Dreamers of the Ghetto, and HFE will hit Glasslands on Mar 8th with Zambri, Rewards, and Lemonade on the 1's & 2's (tickets).

All known tour dates and some video is below.

--
Architecture In Helsinki - That Beep

A Place To Bury Strangers - Keep Slipping Away

HOORAY FOR EARTH - Surrounded By Your Friends