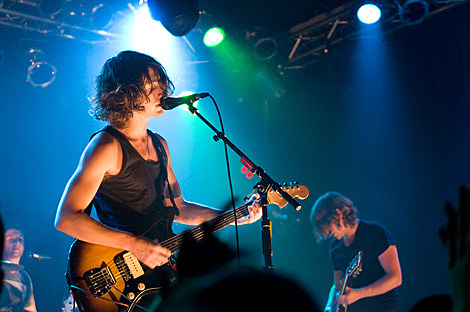 "Arctic Monkeys will also be releasing "Cornerstone" as the second single from their latest album, Humbug, which debuted at #1 on the UK charts. The 10" release will feature three new b-sides ("Catapult," "Sketchead" and "Fright Lined Dining Room"), and will be available digitally on Tuesday, November 17th and physically on Tuesday, December 8th. The band recently performed the song at their guest appearance on The Late Late Show with Craig Ferguson.

The Craig Ferguson video is re-posted below along with the official video for "Cornerstone" which features an older, more-crooning sounding Alex Turner.

In December, the Arctic Monkeys will return to North America to play a few shows. All but one of those shows is in the United States and features Screaming Females as opener! That means Screaming Females will play Terminal 5 for the third time on December 11th (the first two times were with Jack White and band).

Screaming Females also have a bunch of local shows scheduled even sooner including some CMJ ones, like Mercury Lounge on October 21st. Tickets for Terminal 5 go on sale next Friday. All dates and those videos, below...