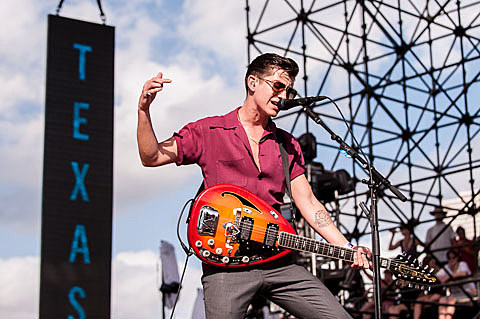 Arctic Monkeys recently graced us with a new single, "Do I Wanna Know?," and they've now announced that it will be the opening track to their new album, AM, which is due out on September 10 via Domino. The album also features the track "R U Mine?," which has been floating around since 2012. It was produced by Simian Mobile Disco's James Ford, who produced or co-produced their last three records, and features Queens of the Stone Age's Josh Homme, who co-produced Humbug and who featured AM frontman Alex Turner on QOTSA's new album. It also features Pete Thomas (Elvis Costello & The Attractions), The Coral's Bill Ryder-Jones, and "punk poet" John Cooper Clarke.

Arctic Monkeys have a number of international dates scheduled, but only a few North American dates, none of which are in NYC. Check out their full tour schedule, along with the AM tracklist and streams of its two singles, below...