Bon Iver at Angel Orensanz in 2012 (more by Fred Pessaro) 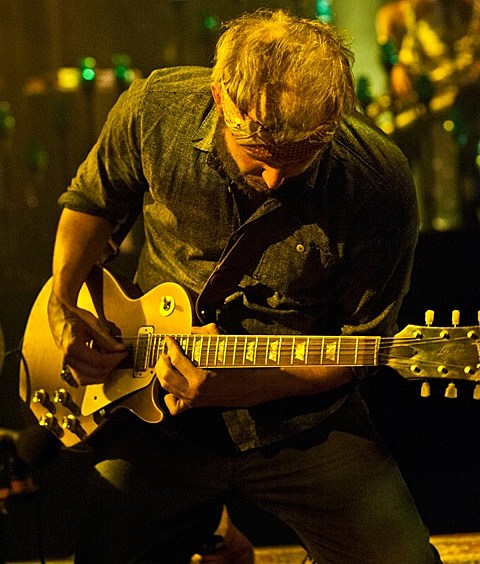 Ever wondered if guitar players' brains work differently than everybody else's'? A recently-published article on PolicyMic says that science proves they do:

It sounds weird to solo while hooked up to a scanning machine, but a few brave guitarists pulled it off and contributed a major finding to the science of guitars. Researchers found that, when a guitarist shreds, he or she temporarily deactivates the brain region that routinely shuts down when achieving big-picture goals, signaling a shift from conscious to unconscious thought.

And when mere mortals (non-musicians) attempt a solo, the conscious portion of their brain stays on, which indicates that real guitarists are able to switch to this more creative and less practical mode of thinking more easily.

All of the research makes it clear that guitarists are just super spiritual, intuitive people. Think about anyone from the Jimmy Page to the Edge right on up to Bon Iver. That sort of intuitive thinking runs all the way to how they learn. Unlike musicians who learn through sheet music, guitarists, according to researchers at Vanderbilt University, get a better grasp of a song by looking at someone playing it rather than reading the notes on paper.

Commenters on the article don't seem to be in agreement (many say it's not limited to guitarists). What do you think?

Let us know and watch Bon Iver totally zoning out with his guitar below...