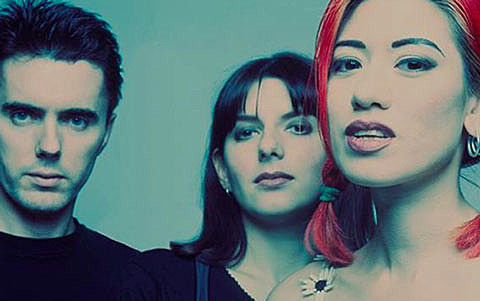 Ride are currently in NYC, having played their first of two shows at Irving Plaza on Monday night (9/21). Rumors are flying around the internet that Ride's onetime North American tourmates, Lush, are about to reform as well. Most of this stems from a Tweet guitarist/singer Emma Anderson sent out on Monday (see above) that simply said "7 days" which was enough to send some fans into overload. It wouldn't really be surprising if they did. We shall see what it all means next week.

Lush formed in 1987, signed to 4AD a couple years later and with their sometimes hazy, sometimes punky sound they fit right in at the label with the likes of Cocteau Twins (whose Robin Gutherie produced some of their singles), Pale Saints and Pixies. In addition to their 1991 tour with Ride, Lush also were part of the second year of traveling roadshow Lollapalooza, and were one of the few shoegaze bands to get some airplay on U.S. commercial alternative radio. They also successfully transitioned into the mid-'90s Britpop era, and Jarvis dueted with Miki Beryni on Lush's playful "Ciao!" from their final album, Lovelife.

Sadly, drummer Chis Acland committed suicide in 1996 following the Lovelife tour and the band never recovered, breaking up officially in 1998. Emma Anderson formed Sing-Sing, bassist Phil King (who had played with Felt, The Servants, Biff Bang Pow! and more before Lush) now tours with The Jesus & Mary Chain, and Miki Berenyi basically dropped out of music and became a magazine editor.

While we wait for some kind of announcement, whatever it actually ends up being, watch some Lush videos below...