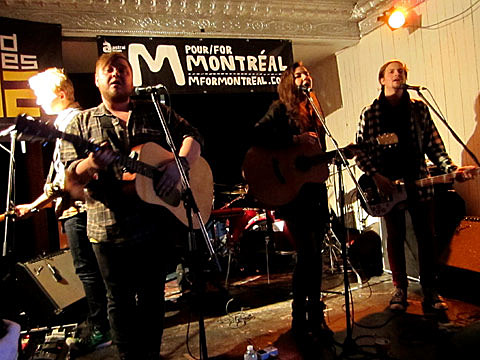 While the rest of the world was asking who the #$%@ Bonny Bear and Paul McCartney were, I was asking that same question of Of Monsters and Men who are playing here in April. They've already sold out their 4/5 show at Music Hall of Williamsburg and 4/6 show at Bowery Ballroom, though the Bowery show was moved to Webster Hall (tickets are still on sale, but maybe not for long). Actually, half their US tour is already sold out (all dates at the bottom of this post).

Then I remembered I had actually seen Of Monsters and Men -- who are from Iceland --  at last year's M for Montreal at teeny tiny club Casa Del Popo. Their name is a bit on the generic side which is why I think I couldn't place it. (You also see a lot of bands at festivals. It's a blur.) Anyway, here's what I wrote then:

I don't think a folk band has snuck up like this since Mumford and Sons (or maybe The Head and the Heart).

They're already huge in Iceland (which is like being huge in Rhode Island, but still), where their debut album, My Head is an Animal, was released last year. Of Monsters and Men signed to Universal who rushed out the Into the Woods EP in America late December, which contains the KEXP hit "Little Talks". The band will be at SXSW too and are surely one of the "Bands to Watch" this year for some folks.

Click through for all Of Monsters and Men tour dates, plus some videos as well.

Of Monsters and Men at Iceland Airwaves 2011