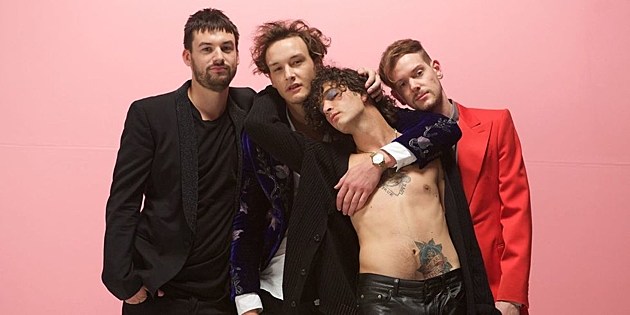 The 1975 have been a very popular rock band for a few years now, but, as frequent BV readers may have noticed, we're not big fans on this website. Around the time of their 2013 self-titled debut, they looked and sounded like a generic mindie band, one not immediately separable from Imagine Dragons, Bastille, Walk the Moon or the masses of other bands like this whose names you now see on festival lineups every summer. We were turned off at first listen. But a few things are different for The 1975 on this new album cycle. They're not necessarily a great band all of a sudden, but they're becoming pretty impossible to ignore.

The new album is called I like it when you sleep, for you are so beautiful yet so unaware of it, which either comes off as cheesy, sincere, or a little too close to the casually sexist idea that men desire women who don't think highly of themselves (or a mix of all three). So just from the title alone, you kinda know you're dealing with something more interesting than The 1975. I don't love the music, but it's listenable. My biggest complaint is that the influences feel super obvious -- the poppier songs off I like it when you sleep are more or less rehashed versions of Duran Duran, INXS, Scritti Politti and other '80s pop/rock groups. But I do like their style. Just compare the video for "Girls" off their first album to the video for "Love Me" off the new one. The former has the band in matching black outfits with boring hipster hairdos playing against a plain white background. It looks ready-made to be instantly forgotten. But the latter has singer Matty Healy shirtless with leather pants, neon eyeliner and Michael Hutchence-inspired hair. He's prancing around with hot pink props, spitting out champagne, and being shamelessly sexy, seductive, and androgynous. And he means it. He's the kind of frontman that's been incredibly uncool in rock since the grunge explosion, and when it is done, it's usually done ironically (like The Darkness). But there really doesn't seem to be anything ironic about The 1975. Self-aware definitely, but not ironic.

Maybe that all makes you cringe. Maybe you've come up with enough punk and indie ethos that you think this kind of frontman should stay uncool. But the lines between "cool" and "uncool" are blurrier and more arbitrary than ever, and there's absolutely a place for this kind of thing even if it's not for you. The 1975's fanbase is young (and, as is often the case with bands perceived to be "uncool," highly female) and they seem poised to be the next major gateway band. My complaint about them sounding too much like Duran Duran, INXS or Scritti Politti doesn't matter to people who have never heard those bands. Just like 12 years ago it didn't matter to kids how obvious it was that The Killers ripped off New Order or whoever, or how bombastic they were. That band wasn't very cool in 2004 either, but all this time later they're still putting on great sets as festival headliners and inspiring vital young bands, and Brandon Flowers put out a pretty solid solo record last year. 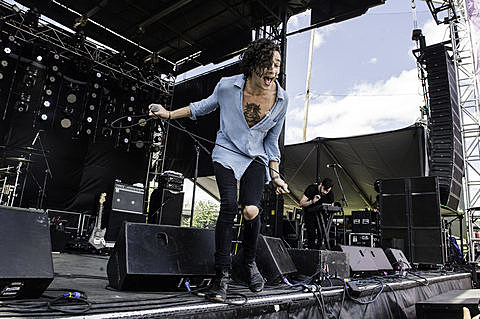 Kids deserve a frontman like Matty Healy and they deserve an unselfconscious rock band who aim for the stars. The 1975 don't particularly rock that hard -- they actually don't even use many guitar riffs on the new record -- but they have that kind of presence. When I was first developing my own identity with rock in the late '90s and early '00s, it was anything from like Weezer and The Smashing Pumpkins to Everclear and the Goo Goo Dolls to The Offspring and blink-182, and it didn't matter if those bands were "cool" or not. They were world-conquering rock bands with massive hooks and the total ability to change a person's life. Maybe if you're a little older than me it was Guns N' Roses or Motley Crue. Maybe if you're even older than that, it was Boston or KISS. Those are all ridiculous bands, but where would we be without them? Hearing something like that at exactly the right time in your life is a transformative experience, no more or less valid than stumbling into a New York Dolls concert on a coke bender. And with rock having no current place on the radio or MTV, it's not a bad thing that The 1975 are walking confidently into the pop world, associating with One Direction and Taylor Swift. Is it somehow better for the kids to read blogs and be told check out a band with no hooks or charisma like DIIV? Matty Healy may be cheesy, but he's got a kind of power that rock is missing.

This is not to say, by the way, that The 1975 is only a kids band. A friend of mine in his 40s caught their recent Terminal 5 show in NYC and said he loved them. He also said the line to get in stretched multiple blocks, and once the band came on, the crowd was shrieking like when The Beatles came to America and rushing the barricade. It's clear that they're only bigger now -- their next NYC show happens at Brooklyn arena Barclays Center on May 17 (tickets). That show is with Wolf Alice, a harder rocking British band who I'm also not sold on, and The Japanese House.

Should The 1975 in fact be a gateway band, one band we can probably count on them introducing people to is M83. Just check out how many reviews of The 1975's debut mention them. On I like it when you sleep, after kicking the record off with a handful of pop songs, they dive into a middle section of atmospheric, ambient material that feels very M83-ish. It could be filler because they can't come up wit a full album of pop songs, or maybe it's there to show "how serious" they are if you "listen to THE FULL ALBUM, man." Or maybe a little of both. It certainly makes the record more intriguing than the singles alone would lead you to believe, but those singles are the best moments. After an intro track you get the one-two punch of "Love Me" and "UGH!," and that first section also includes the sugary, addictive non-single "She's American." After getting the final ambient song out of their system (the title track), they come back in strong with another single, "The Sound." The album's worst moment is probably the ending. It ends with two acoustic songs, "Nana," which comes way too close to a Backstreet Boys ballad, and "She Lays Down," which recalls the early '00s acoustic emo these guys came up on. (Before they were The 1975, they went through several name and genre changes, and were at one point much closer to a pop punk/emo band. That actually makes even more sense when you consider that they're not a million miles away from how Fall Out Boy and Panic! at the Disco currently sound. In fact, The 1975 probably appeal more to people who grew up on those bands than the current emo revival bands like Modern Baseball or Foxing do. Though Healy did just shout out TWIABP in a SPIN profile. But I digress.)

At 17 songs, the album is way too long. It could lose a few of the M83 knockoffs and definitely those two acoustic songs, and even its best moments are overly derivative. But they're a fascinating band, and we could use more rock bands who are. Even if you hate 'em, they're gonna be tough to ignore.