WU LYF at MHOW in April (more by Amanda Hatfield) 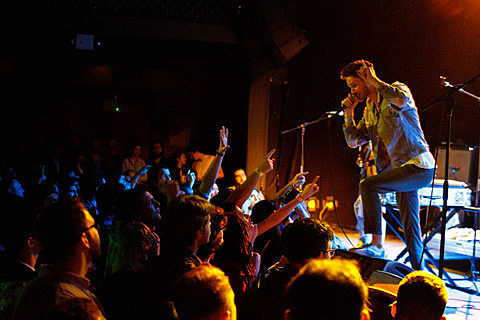 Over the weekend, WU LYF posted a new track, "T R I U M P H," to YouTube, along with a message that seemed to either imply the band have broken up or that frontman Ellery James Roberts has chosen to leave the group. The song and message have since been taken down, but the message (written by Ellery) read:

"By the time I wrote this I was all ready gone. You know you aint got nothing but time, but time isn't an infinite currency I want to see wasted. If this is our last month living, apocalypse looming, I am not going to spend my final hours waiting in purgatory. I am done. There is nothing here that inspires/ interests me beyond the emptiness for dreams. and I don't want to spend my life asleep; dreaming of a....

"Wake up! We stay safe/ everything is golden/ in this place.

"WU LYF is dead to me. The sincerity of "Go tell fire" was lost in the bull shit of maintaining face in the world we live. Clap your hands chimp everybody's watching. A year spent losing faith; Innocence lost wide eyes see clear the dark. There's blood running down streets of every city in the world, what's a song to do, pretend it mean everything/nothing to you. Another distraction from the world we live. I and I struggle for a based positivity; Get free or die trying; J C Hung him self up for the easy way out. so Broken Mama Cita be kind to me."

Ellery followed that up with another message directed at the other three members of WU LYF, Evans Kati, Tom McClung, and Joe Manning:

I am gone. This isn't the end. This is the begging.
We done business to be as free as we want to be; I'm exercising this freedom. Manchester and the life we maintaining is leaving me empty. It is a beautiful/ incredible/ insane world we live and I'm done walking round in baby step circles in a self involved bubble. WU LYF isn't that important. So go do what you want to do. If you wanna play together, Play! your talented musicians so don't waste that. I am bored of the most challenging thing in WU LYF being deluding myself of its relevance. Dirty free, as that show ended it concreted my decision that a change has to come. "Be the change you want to see" said a wise old man.
I'm going to keep on doing what I do; if the time comes in the future where we all truly want to collaborate on something then that door is always going to be open; I have nothing but love for you all.

But I want to live life that's true to me.

Stay safe
your Brother from another mother...
X

(I'm gonna stay on email so keep in touch.)

Nothing else was posted to the band's official site and their official Facebook page has been taken down. The only message we've seen since is a tweet from Tom McClung's other project, Francis Lung, which reads, "not over yet."

WU LYF's only release is 2011's impressive Go Tell Fire to the Mountain, and it would be pretty sad to not see them continue after that. The new track, "T R I U M P H," has since been posted to a different YouTube page and you can listen to it below.