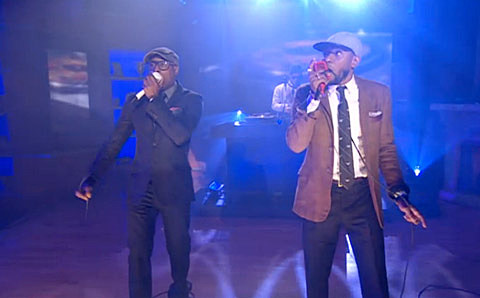 Big night for music on late night TV last night (and lately in general). You may have heard that Portishead played their first TV appearance in 13 years on Jimmy Fallon last night. Black Star, as promised, also played a new song "Fix Up" on The Colbert Report (but not at Irving Plaza, or the rest of their tour for that matter). Mastodon performed "Curl of The Burl" last night on David Letterman. Video of the Mastodon and Black Star (aka Talib Kweli and Yasiin Bey) performances, as well as the hip hop group's interview with Stephen Colbert is below.

Speaking of new music by Talib Kweli, his other project Idle Warship has a new album coming. Check out one of the new tracks at Rolling Stone. See them live Saturday in Brooklyn, or at one of the other dates listed below.

Meanwhile, as previously mentioned, former Dillinger Escape Plan vocalist Dimitri Minkanakis's band Argonauts (with Dave Witte & John Adubato of Burnt By The Sun, Brett Bamberger of East of The Wall) will play their debut NYC show at ABC No Rio on Saturday (10/8). They'll be joined by Alkahest, Thou, and The Body.

Mastodon & Black Star videos from last night as well as some Argonauts live video, below...

Argonauts at The National At GWARBQ 2011